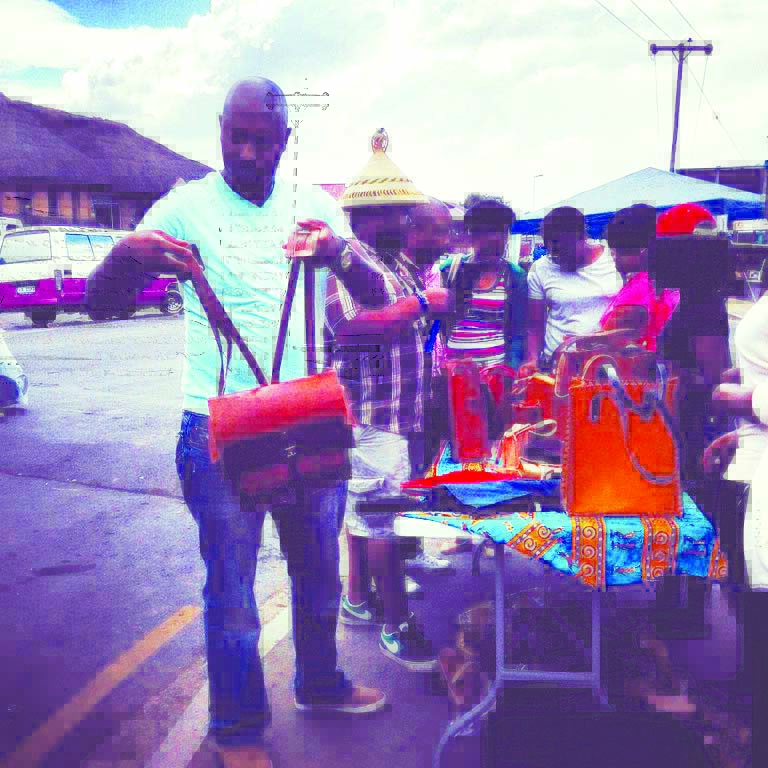 THEY say necessity is the mother of invention, and for leather connoisseur Tumane Thabane unemployment was the nudge he needed to start a business.

Thabane, who owns the Lithabaneng-based Haka Productions told the Weekender this week that he forayed into the leather products business in 2006 after graduating with a degree in Statistics at the National University of Lesotho (NUL) and failing to find a job.

“After graduating from NUL, I realised that I had a lot of time on my hands since I could not get a job,” he said.

“I then joined my friend, Moeketsi Ramokhosi, in his leather sandals business in 2006. That went on until 2009 when I finally found a job at the Ministry of Development.

“I still had the passion for making leather products, so I made a belt by copying the one I had bought, and someone told me they wanted to buy it.”

Thabane said he continued making belts in his spare time until 2012 when he decided to form and register a company called Haka Productions.

“From then on, I diversified my product range to include bracelets, earrings, belts, gun-holders and bags,” he said.

“I would copy the designs from the internet or from clothing stores until I could create my own. With time, I became popular by advertising myself on social media.

“When I realised that I could actually earn a living through my passion, I resigned from my job last year and went to study leather tanning in China from September to November courtesy of the Chinese Embassy in Lesotho.”

Thabane said the course equipped him with a better understanding of leather and how to manipulate it into different forms such as soft, hard, rough or smooth as well as changing its colour. During the China trip, he also had the opportunity to meet potential suppliers.

Following his return home, Thabane put the training into practise by making leather products that would appeal to young people.

“Leather products were often associated with old people because they usually came in the colours of black and brown,” he said.

“I decided to change that monotony by adorning my products with different vibrant colours ranging from orange, red, green, pink and blue depending on the client’s preference.”

Over the years, Haka Productions has been showcased in a number of exhibitions around the country and in South Africa. Thabane clinched the number two spot in the leather production category during last year’s tourism awards. He also won second place during the Hookup Dinner, a Sub-Saharan African network of emerging entrepreneurs held at Pioneer Mall last week.

Like other entrepreneurs, Thabane has his fair share of challenges. He said it was difficult to find people with whom he could partner.

“What kills most Basotho businesses is their unwillingness to work together with others as they often think they would lose out. I have approached many people to partner with them, but so far nothing has materialised,” he said.

“My other challenge is that most customers want to buy my products on credit and come up with delaying tactics when the time to pay comes, and that is bad for business.”

However, he said such challenges did not deter him from his dream to supply major apparel stores and renowned boutique with his products. He also plans to hold a fashion show to exhibit his products on the runway.