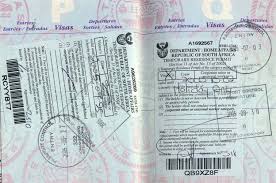 The syndicate was using the stolen stamp to illegally endorse passports of people who would have overstayed in South Africa.

Police say South African Home Affairs officials noticed that in some passports the endorsement stamp had been corrupted.

“A South African Home Affairs officer and five Basotho men were arrested and briefly appeared before the Maseru Magistrate court charged with theft and unlawful possession of a South African endorsement stamp on Monday,” Kolo said.

“The suspects Tumisang Lehlehle, Lehlohonolo Manong, Thapelo Manong, Lerata Malefane and Monyane Moleleki (not the Democratic Congress deputy leader) were arrested on Friday last week after they were found in illegal possession of a South African endorsement stamp.

“The five men revealed that they got the stamp from a South African Home Affairs officer, one Willies du Plessis, who is currently on suspension,” he said.

However it is not clear why du Plessis was suspended from work in South Africa.

Du Plessis, who the police say is the kingpin in the syndicate, appeared in court and was released on bail of M1 500 and a surety of 10 000.

He provided a piece of land located in Lesotho as surety. The five Basotho men were also released on M500 bail each. The suspects will be back in court next month.

It is during their investigations that they found out that there were a group of men who had an office in Ha Hoohlo (a village situated near the Maseru Bridge Border post) who were helping people who had over stayed in South Africa to get their passports released.

The suspects normally market their services to Basotho going to and from South Africa near both border gates.

The syndicates reportedly advertise their services to passengers disembarking taxis from South Africa saying they can assist desperate travellers to secure the release of authorities withhold their passports over one offence or another.

Most of the suspects’ clients are Basotho men working in South Africa without work permits so they pay easily opt to bribe the suspects to avert fines or arrests.