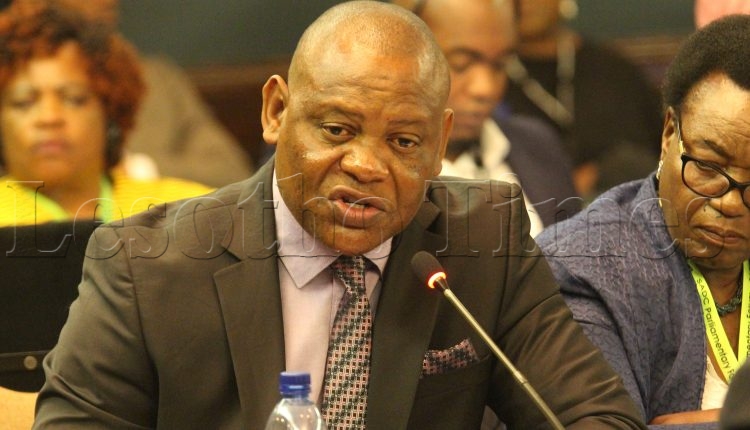 WINDHOEK – Covid-19 is a global public health challenge but in Africa the malady has metamorphosed into an “economic pandemic” requiring bold and innovative parliamentary responses, SADC Members of Parliament have been told.

Mr Deprose Muchena, the Regional Director at Amnesty International Regional Office for Southern Africa, said this when he addressed SADC Members of Parliament on Tuesday. The MPs belong to the Standing Committee on Trade, Industry, Finance and Investment (TIFI) of the SADC Parliamentary Forum. Their Committee met virtually.

Muchena’s presentation focused on the role of parliament in mitigating the effects of COVID-19 on the trade and business environment for the SADC Region.

He said the impact of global and local measures to respond to Covid-19 that include economic and social lockdowns to stem the spread of the virus, declarations of states of emergency or curfews had begun causing “significantly biting consequences”.

He explained: “In Southern Africa we had six states of emergency declarations and some curfews. Most countries imposed lockdown measures which took a public health approach which usually leaves behind accompanying measures that respond to unintended consequences of the crisis.”

Turning to the intersection between Covid-19 and poverty, Muchena said global projections were that the pandemic would push an additional one billion people – 20 per cent of them due to related income cuts – into poverty.

He added: “In Sub-Saharan Africa, additional 44, 6 million people will go into poverty … There will not be consumption capacity for most people.”

On trade, he said, expectations were that there would be a global trade fall of up to 27 per cent in the third quarter of the year 2020, according to the United Nations. For Southern Africa, the trade fall will mean less business with trading partners including those in the global north due to low demand for goods and services.

“This is serious because it has a triple impact on trade flows, trade volumes and income for Southern Africa,” he said, adding that cross-border trade would not be spared.

Amnesty International reckons that informal cross-border trade accounts for between USD17 billion and USD20 billion per annum and so if cross-border informal traders are unable to move and do business, the impact on household incomes would be dire.

Muchena said: “Informal trade generates about 70 per cent of jobs in Africa. The formal economy is very small. This Committee must zero in on what has happened in the informal sector in Southern Africa because that’s where we have lost income connected to households.”

Turning to supply chains, Muchena said Covid-19 had been “severely” disruptive and urged MPs to brace for the “long haul” towards recovery.

He noted: “There were also pre-existing conditions. Covid-19 arrived in Africa when we already had food insecurity, malnutrition and many of our children affected by conflict … Thirty-four million people are affected by extreme weather conditions.”

On food security, Muchena said the World Food Programme  (WFP) had released data showing that “hunger and poverty stalks about 40 million people in Southern Africa” due to the coronavirus and “drought-induced climate shocks”.

Although some governments in Africa had come up with various packages to support those affected by Covid-19, Muchena said many of those safety nets had “been largely meaningful to large business formal entities” while leaving the informal sector in limbo.

He said: “That calls for an examination of the adequacy of our stimulus responses and whether, in fact, the models of our economies are sufficiently pro-poor.”

Three of the 10 top performing economies in Africa are in the SADC Region. They are Angola, South Africa and the United Republic of Tanzania. Muchena said the 10 were expected to go into recession later this year due to declines in economic activity and aggregate Gross Domestic Product.

“Therefore, the ability to deal with existing problems of unemployment, poverty and inequality in 2021 is going to be difficult.”

The Committee agreed on the need for parliaments to build capacity to stem corruption and illicit outflows of money from the continent through, inter alia, trade mispricing, over-pricing of imports and under-pricing of exports.

There was agreement, also, on the need for parliaments to use their oversight mandate to ensure prudent use of resources earmarked for responding to Covid-19.

Many countries in the SADC Region and in Africa are heavily indebted to global financial institutions. The Committee agreed on the need for parliaments to unite in calling for a debt moratorium while building a regional response to Covid-19 in collaboration with civil society organisations.

The jury is still out with respect to what form the global economy will take post-Covid-19. Nevertheless, the Committee urged national parliaments to remain vigilant in case there were major shifts that can affect exports. Additionally, parliaments were urged to strengthen the monitoring of the implementation of TRIPS flexibilities to facilitate access to medicines.

Muchena said Covid-19 caught many African governments financially unprepared to cope with it. In many countries ventilators, hospital beds and other medical equipment were inadequate.

The Committee agreed that parliaments must ensure that their countries act prudently should they have to borrow to cope with and recover from Covid-19.

African parliaments, according to Muchena, must be deeply concerned about the “fragility” of their economies and how they can adapt to a “fairly new, restructured and completely different global economy” after Covid-19. He warned that nothing would be the same again.

As many countries plead for and raise resources to dig out of Covid-19, there was unanimity within the Committee that parliaments’ oversight function be strengthen so that resources raised in the name of the poor actually reach the intended beneficiaries.

“The pandemic threatens the socio-economic welfare of our region in that it has negatively impacted commerce, trade and industry and has virtually killed economic activities, especially those of small scale businesses, which form the bulk of our local people in our respective countries.”

He challenged MPs to think “outside the box”.

“We are expected to exert enough influence on our governments to ensure that any legislative and budgetary interventions put in place, are done with utmost prudence, transparency and accountability,” he said.

He said fixing battered and weakened economies “may require a holistic approach which involves multiple measures that are neither popular nor tested, but which are nonetheless necessary to save the situation.”