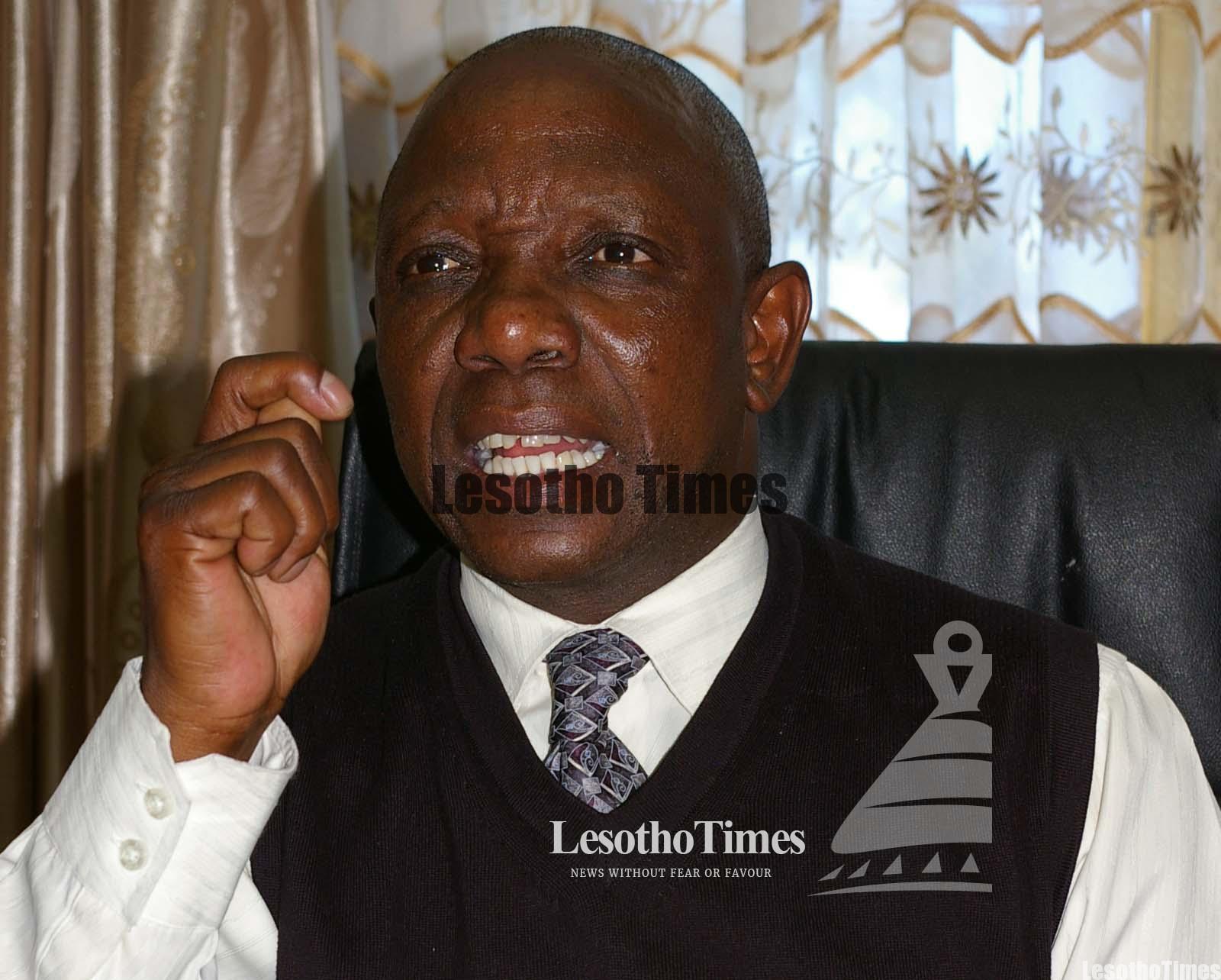 The Constitutional Court is, next Wednesday, set to hear a case in which the Director of Public Prosecutions (DPP), Leaba Thetsane, is challenging government’s decision to send him on forced retirement.
The hearing date was set yesterday after government filed answering papers, maintaining its stance to remove Advocate Thetsane (King’s Counsel) from office with immediate effect.

Prime Minister Thomas Thabane wants Advocate Thetsane out of office on the grounds that he is past the retirement age of 55 years, as stipulated by the country’s constitution.
Advocate Thetsane is now 56 years of age.

However, the DPP contends his continued occupation of the post results from provisions of the Public Service Act of 2005, which he says provides for a retirement age of 60 years.
Although a letter from the Acting Government Secretary, Moahloli Mphaka, dated 16 June 2014, directed that Advocate Thetsane must vacate office with immediate effect, he still remains in his post after obtaining an interim relief issued by Acting Chief Justice Tšeliso Monaphathi two days later.

In his ruling, Justice Monaphathi ordered “the applicant (Thetsane) will continue to function as the Director of Public Prosecutions pending the finalisation of this matter. The parties recognise that this matter be heard as one of extreme urgency.”

However, Advocate Thetsane is also expected to have responded to the government papers by tomorrow in preparation for next Wednesday’s hearing.
According to Mr Mphaka’s letter, Advocate Thetsane was now occupying the post contrary to the country’s regulations, which stipulate he should have retired at the age of 55.
A similar letter was written to the Attorney General, Mr Tšokolo Makhethe — also on Monday last week.
Mr Makhethe has since obtained an interim order allowing him to continue in his post until the matter has been finalised.
The interim order was granted to give Mr Makhethe and government an opportunity to negotiate an amicable settlement to the case.
Meanwhile, in his court papers, Advocate Thetsane argues his removal from office is unlawful and wants the Constitutional Court to set it aside.

He further seeks the court to declare he is entitled to retire at the age of 60, and not 55.
In his lengthy affidavit, Advocate Thetsane relates how he was appointed and ended-up not retiring at the age of 55.
“By Legal Notice 218 of 2000, I was appointed Director of Public Prosecutions with effect from the 1st day of January 2000, a position I hold to date.
“At the time of my appointment, the retirement age of the DPP was 55 years as more fully set out in Section 141(8) of the Constitution of the Kingdom of Lesotho.
“That position was changed by two events: the first was the enactment of the Public Service Act No 1 of 2005 which, in Section 26(1), fixed the now-retirement age for Public Officers at 60 years.
“The second was a voluntary act on my part to agree or consent to be bound by provisions of Section 26(1) aforesaid.
“The election to be so bound was done pursuant to the provisions of Section 148(8) of the Constitution and Section 26(4) (b) of the Public Service Act 2005,” he stated.

He further argues his voluntary decision to be governed by the Public Service Act concerning the retirement age of 60 years cannot be revoked because he is yet to attain that age.
“I was born on 27 July 1958, and will be due for retirement on the 27th of July 2018, when I attain the age of 60 years.
“The above facts notwithstanding, on the 28th May 2014, I received a letter from the Acting Government Secretary, the gist of which was that he and the Prime Minister were of the view that I should have retired at the age of 55 years. I was asked to make representations,” he further notes in the affidavit.

Advocate Thetsane further reveals he responded to Mr Mphaka clarifying his position, but adds he received another letter from him on Monday last week directing that he vacates office with immediate effect.
Part of Mr Mphaka’s letter reads: “In my capacity as Acting Government Secretary and as such charged with overall responsibility over all public officers, I direct you to vacate the Office of Director of Public Prosecutions with immediate effect.
“By copy of this letter, I have advised the Public Service Commission (PSC) that I have directed you to vacate office.”
But in his affidavit, Advocate Thetsane says the directive is against the law.

“The purported directive is unconstitutional and unlawful in that both the First Respondent (Dr Thabane) and Third Respondent (Mr Mphaka) have no power or authority to require me to retire and I have not reached the retirement age.
“Since the matter is one of both constitutional and statutory interpretation, one would have expected the First and Third respondents to have sought a declaratory order in the courts, rather than arrogate themselves the power they do not have of dismissing me under the pretext that I should retire,” he states.
The DPP also urges the court to treat his case as urgent since the directive affects him personally.

“I verily aver that personally, I will suffer untold prejudice should I be removed from office immediately as the respondents intend to do, while I am not yet due for retirement.
“I need not set out in detail, the nature of the personal prejudice that I stand to suffer by my immediate removal from office save to say that the removal, in itself, being unlawful and unconstitutional, is prejudice enough.
“There is no doubt that the First Respondent already has someone in mind to replace me as Director of Public Prosecutions, as his intention to appoint a suitably qualified person to replace me was clearly made in annexure DPP2 hereto,” he said.

The Annexure DPP2 he is referring to is the letter written by Mr Mphaka, stating that his continued occupation of office was unlawful.
However, Advocate Thetsane further argues his removal from office would “also adversely affect and/or prejudice public interest as it may bring to a standstill, indictments and prosecution processes that were underway under my direction.”