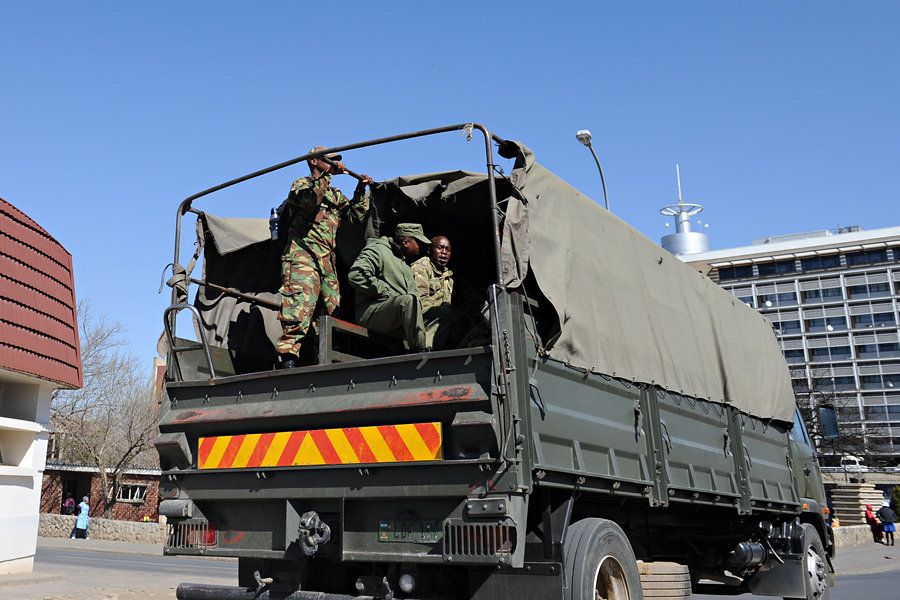 THERE is an old adage about the long arm of the law eventually and always catching up with offenders and violators of legal rules.  The events in this Kingdom this week fully vindicates this adage. So to all the uncouth criminals and scum who had made this country a hell-hole, with open approval of their political masters, we say your time has arrived.  You could have run and hidden but only for so long. You must now meet and enjoy your comeuppance.

As reported elsewhere in this edition, the killers of Maaparankoe Mahao are now in the sack. So are the brutal would be murderers of our editor Lloyd Mutungamiri.   Every peace loving Mosotho has every reason to be upbeat about the direction the Thomas Thabane government is taking in terms of reining in the criminals whose actions had threatened the stability of the country and converted it into the laughing stock of the region and the world, as so well said by King Letsie 111 at some stage.

We report that four suspects have been apprehended in connection with the near-fatal shooting of Lesotho Times editor, Lloyd Mutungamiri, in July last year in an operation the police say was authorized by the Lesotho Defence Force (LDF).  We all knew that was the case. Tlali Kennedy Kamoli and the scoundrels he commanded could only have been the persons with a clear motive to decimate us and commit the dastardly act.

These shootings, among other crimes, committed during the Mosisili era were obviously disheartening.

Mutungamiri’s shooting followed a rough week for the Lesotho Times during which its staff were summoned for heavy-handed interrogation by police and military officials over a seemingly harmless report the newspaper had published about the LDF. Mahao was killed because of Kamoli’s hatred of anything that appeared to be a threat to his imagined power.

It really should not have been so difficult to investigate and apprehend the assassins and bags of scum behind these murders. But it would not be. The regime of Pakalitha Mosisili lacked the political will to protect the innocent of this country.  In fact when the then government looked the other way when the rights of innocent people were being trampled upon, it only emboldened the hand of the Lesotho Defence Force (LDF). Its members became laws unto themselves. But at what cost?

When a country persistently hit news headlines for the wrong reasons, it faces political and economic paralysis. No one wants to invest in a context of mayhem. Yet that is what we became at great expense to Basotho.

The arrests of these suspects therefore represents a major breakthrough and positive development for this nation.

For the government which came to power in the aftermath of the 3 June 2017 snap elections, the development goes a long way in demonstrating that they can be relied on to fulfil their pledges to restore the rule of law and hold its violators accountable.

For the LMPS, the developments of this week will help in restoring their otherwise dented image in the eyes of the public. They are finally looking like the professional outfit at the service of the nation in the maintenance of law and order and not an extension of the security branch of the Lesotho Congress for Democracy (LCD) or Democratic Congress as the police seem to have become while they ignored their work during the Mosisili era.

For the victims’ families, the arrests are the beginning of efforts which will lead to justice and hopefully closure.

What is clear from this episode is that though the wheels of justice may turn slowly, they will eventually catch up with offenders regardless.

At least for now, the era of impunity appears to be over.

We can only commend Police Commissioner, Holomo Molibeli, and his team for their excellent work.  It is ample testimony of the good that can come from dedicated public servants if they are left to do their work, away from prying and self-serving politicians.

Unrelenting crime must be curtailed