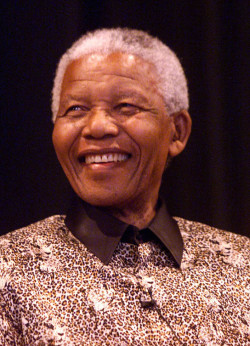 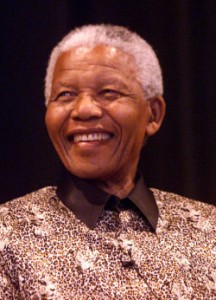 1918, July 18: Born Rolihlahla at Mvezo village in Transkei, one of 13 children in a family with connections to Thembu royalty.

1925: Attends primary school near Qunu. Teacher names him Nelson, in line with the custom at the time of giving English names to children.

1927: Entrusted to Paramount Chief Jongintaba Dalindyebo after his father dies when he is nine-years-old.

1938: Matriculates from Healdtown Methodist boarding school and enrols at the SA Native College of Fort Hare.

1940: Elected to Fort Hare student representative council, but is expelled after a student strike.

1941: Leaves for Johannesburg to avoid an arranged, tribal marriage.

1942: Starts articles at the law firm Witkin, Sidelsky and Eidelman. Completes BA degree from the University of SA via correspondence.

1943: Enrols for an LLB at the University of the Witwatersrand; joins the African National Congress (ANC).

1946: Evelyn gives birth to their first child, a boy named Thembi. Another boy and two daughters, one of whom dies in infancy, follow over the next nine years.

1949: Mandela joins the ANC executive after the ANCYL takes control of the organisation.

1952: Appointed volunteer-in-chief of the ANC’s non-violent defiance campaign against racist laws. Elected Transvaal leader and first national deputy president of the ANC. Arrested and convicted with JS Moroka, Sisulu and 17 others of violating the Suppression of Communism Act: sentenced to nine months imprisonment with hard labour, suspended for two years.

1952, September: Banned from attending meetings or gatherings for the next two years.

1953: Devises the M-Plan for the ANC’s future underground operations.

1955: Separates from Evelyn and meets Winnie Madikizela, a social worker from Pondoland. Watches as the Freedom Charter is adopted at Kliptown.

1956, December 5: Arrested on a charge of high treason with 155 other people; the trial drags on for several years.

1960, March: Mandela imprisoned with thousands of others as a state-of -emergency is declared. The ANC and PAC are banned in the wake of the Sharpeville massacre.

1961: Mandela and all the other treason trialists are acquitted. The government bans the ANC, which in turn sets up its armed wing, Umkhonto we Sizwe (MK), under Mandela’s direction. Mandela goes underground and the first acts of sabotage follow in December.

1962, January: Mandela is smuggled out of the country for guerrilla training.

1962, August 5: Mandela is arrested in South Africa, near Howick in KwaZulu-Natal.

1962, November 7: He is sentenced to five years in jail for incitement to strike and for leaving the country without a passport.

1963, January: The nucleus of MK’s leadership is arrested at Liliesleaf farm in Rivonia.

1963, October 9: In what becomes known as the Rivonia Trial, Mandela, Sisulu and eight others are charged with sabotage and attempting to violently overthrow the state.

1964, June 11: Mandela and all but two of his co-accused are found guilty of sabotage.

1964, June 12: They are sentenced to life imprisonment. Mandela is sent to Robben Island.

1973: The government offers to release Mandela to the Transkei. He refuses.

1977: Winnie is banished to Brandfort, in the Free State.

1979: Mandela is given the Nehru Award by the government of India.

1980: The ANC’s leadership in exile launches the “Free Mandela” campaign.

1982: After 18 years on Robben Island, Mandela is moved to Pollsmoor Prison, on the mainland.

1985, August: Justice Minister Kobie Coetsee pays a social visit to Mandela in hospital where he is undergoing prostate surgery. Mandela is later separated from his comrades to give the government private access to him.

1986, February-May: Commonwealth Eminent Persons’ Group visits Mandela but fails to persuade the government that he should be released.

1986, June 12: A nationwide state-of-emergency is declared and Mandela secretly meets Coetsee for talks.

1986, August: A prison official takes Mandela on his first car outing in 24 years.

1988: Mandela is moved to the private Constantiaberg MediClinic in Cape Town for treatment of tuberculosis.

1988, December 9: He is moved from the clinic to a warder’s house at the Victor Verster prison.

1990, March 2: He is elected as ANC deputy president under Oliver Tambo.

1990, May 2: Mandela heads the ANC delegation in talks with a government team on the transition to a non-racial democracy.

1990, June: He visits Europe, the United Kingdom, North America and Africa, then attends an Organisation of African Unity summit in Addis Ababa.

1991, December: Attends first meeting of the Convention for a Democratic South Africa (Codesa), set up to negotiate procedures for constitutional change.

1992, April 13: Announces that he and Winnie have agreed to separate.

1993, May: Causes a political row when he suggests 14-year-olds should be allowed to vote in the coming polls.

1993, December: Awarded the Nobel Peace Prize, together with De Klerk. His autobiography, Long Walk to Freedom, is published.

1994, April 27: Votes for the first time in his life, and the ANC wins a convincing majority in Parliament.

1994, May 9: Elected unopposed as president in the first session of the new National Assembly.

1994, May 10: Inaugurated at the Union Buildings in front of the largest gathering of international leaders ever seen in South Africa.

1995, April: Fires Winnie from her post as deputy arts minister, following her involvement in a series of controversies.

1997: Plays a key role in persuading Libyan leader Muammar Gaddafi to hand over Lockerbie bombing suspects for trial in the Netherlands.

1999, December: Accepts position of mediator in a bid to end civil conflict in Burundi.

2001, July: Diagnosed as having microscopic prostate cancer; undergoes a seven-week course of radiotherapy.

2002: Throws his weight behind calls for the South African government to institute a national public sector antiretroviral treatment programme for people with HIV/Aids. Launches global HIV/Aids campaign 46664, named for his prison number.

2003: Celebrates his 85th birthday with a party attended by celebrities from around the globe.

2004, June 1: Announces his retirement from public life with the catchphrase “Don’t call me, I’ll call you.”

2005, January: His only surviving son, Makgatho, dies of Aids at the age of 54. Mandela goes public on the cause of death.

2005, February: Addresses a rally in London’s Trafalgar Square on the eve of a meeting of G7 finance ministers, to demand freedom for the millions of “slaves” of poverty worldwide.

2005, March: Gives his blessing to the creation on Johannesburg’s Constitutional Hill of the Nelson Mandela Centre of Memory and Commemoration, to honour and document his life.

2007: Witnesses the installation of grandson Mandla Mandela as chief of the Mvezo Traditional Council in the Eastern Cape.

2008: Turns 90, and asks emerging generations to continue the fight for social justice.

2009: Mandela’s birthday is endorsed by the United Nations as International Mandela Day, on which people are encouraged to do good deeds for others.

2011, January: Admitted to hospital in Johannesburg for what the Nelson Mandela Foundation describes as “routine tests”.

2011, June: Mandela moves to his home town, Qunu, in the Eastern Cape.

2012, January: The presidency announces that Mandela will return to his Johannesburg home because of “maintenance” at his Qunu home.

2012, February: The presidency announces Mandela’s admission to a Pretoria hospital for a stomach ailment.

2012, December: Mandela admitted to a Pretoria hospital for treatment of a recurring lung infection and to have gallstones removed. He spends between December 8 and 26 in hospital.

2013, March 9: Mandela admitted to a Pretoria hospital for a scheduled check-up. He is discharged the following day.

2013, March 27: Mandela is re-admitted due to a recurrence of his lung infection. He is discharged on April 6.

2013, June 8: Admitted to hospital in the early hours of the morning due to a recurring lung infection.

Mandela’s memorial service to be held on December 10