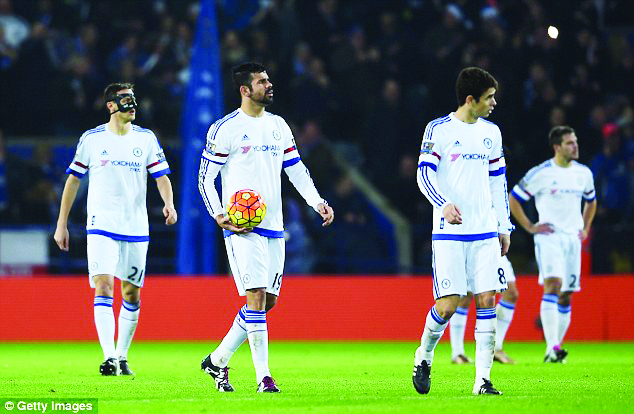 LONDON-There’s no way these Chelsea players can continue working under Jose Mourinho and hope to be successful again, according to Jamie Carragher.

The Blues are sitting in 16th after their ninth defeat of the Premier League season on Monday- a 2-1 reverse at the hands of new leaders Leicester City – just seven months after lifting the title with an almost unchanged squad.

And Sportsmail’s Carragher, speaking on Sky Sports, believes that owner Roman Abramovich now has a crucial decision to make; either change the manager or get rid of a lot of the beleaguered stars.

“There’s obviously a big divide between the players and the manager and it’s up to Roman Abramovich. Whose side does he pick?” Carragher said on Monday Night Football.

“They can’t come back together now and make Chelsea a great team and win things. I’d be very, very surprised if that happens next season.

“Either the manager won’t be there, or they’ll have to completely change the players because I don’t think there’s any way these players and manager can work together for a long period of time.

“He’s normally always taking the side of the players and it’s the manager who is gone. This can’t continue, something has to change.”

Jamie Vardy and Riyad Mahrez scored the goals for the hosts at the King Power Stadium, and Mourinho claimed in his post-match interview that he had been betrayed by his players, who he says he took to a level that was “not their level” last season as they romped to a league title.

Former Liverpool defender Carragher, who spoke alongside Chelsea legend Frank Lampard, believes the Portuguese will feel he was justified in making the public outburst.

“I think what he meant by the word he used in betrayed, is that some of them have chucked it. This quality of player shouldn’t be performing like that.

“You can have a bad run – we’ve all had that as players – four or five games, sometimes it may be longer, once or twice in your career.

“In terms of the players, how they feel, I don’t think what he’s said tonight will affect that, I think that’s gone before.”

Carragher said that the only way Chelsea can expect an immediate improvement is by changing the manager as there is no way to do major business in terms of player recruitment in January, and also spoke about Mourinho’s struggle to lift his side out of this rut. Mourinho signed a new deal at the start of the season which should take him up until 2019.

But Carragher believes this should not be an issue.

“Maybe Chelsea are looking to what Arsenal and United have done. You’ve got one of the most successful managers in world football over the last 10 or 15 years, he’s our figure and we want him as the manager.

“But this is a man who’s never done that. He’s never ever been anywhere three or four years, never mind being anywhere in a run they’re in right now.

“We keep thinking Mourinho, this great manager, will turn it around. The reason he’s struggling to turn it around is because he probably doesn’t know what to do. He’s never been here before, he’s never lost games. He’s not used to losing a home game for four or five years, never mind losing nine games.

“What’s he going to say at the training ground tomorrow, what he hasn’t already done? He’s probably had team meetings with the players, one-on-ones, given them stick, then the carrot after the Spurs game [0-0 draw last month]. Where does he go from here?”

However, Lampard was insistent that his former boss, who he won two titles with himself, should be given time because of the long-term plan.

SADC: Struggle for order and accountability in Lesotho