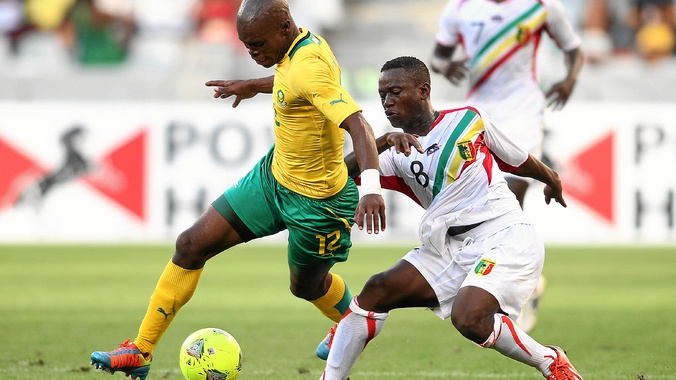 South Africa’s national team has a real chance of winning Chan 2014, but they must first overcome the Nigeria jinx.

The spectre of South Africa needing to avoid defeat by Nigeria to advance in a continental competition is nothing new, nor has it previously delivered a successful return for Bafana Bafana.

The meeting of the continent’s two economic superpowers in Cape Town on Sunday will determine a quarterfinal place at the African Nations Championship (Chan).

The pair play each other in their last Group A game with South Africa needing only a draw to ensure progress, whereas Nigeria must win to avoid being eliminated.

For the first time, South Africa start as the overwhelming favourites, but were far from convincing on Wednesday when some horrendous refereeing decisions worked in their favour, in a disappointing 1-1 draw with Mali.

But Nigeria, who have three points from their opening two encounters after beating Mozambique in midweek, are a poor team, in no way worthy of wearing the green colours of the reigning African champions.

It stands to reason the side at this Chan tournament are the best of the local league, but if you consider that Nigeria exports players at a prodigious pace, then what is left at home is literally the dregs at the bottom of the barrel.

No hotbed of talent
Any Nigerian footballer with any potential is swiftly whisked overseas, with an estimated 150 to 200 playing professionally abroad.

There are as many Nigerian footballers to be found in as remote footballing outposts as Azerbaijan, Liechtenstein, Indonesia and India as there are in the major leagues in England, Spain, Italy and France.

Nigeria’s Premier League, therefore, is no hotbed of talent. It is also reflected in the fact just one Nigerian outfit has ever won Africa’s top club prize, the African Champions League in more than 40 years of competing.

Many were aghast when Stephen Keshi picked six locally based players in his squad for last year’s Nations Cup; in hindsight he was perhaps making a point to some of the country’s European-based stars who regarded their place in the squad as a given.

But he only used two of them – the defender Godfrey Obonabona, now playing in Turkey, and Sunday Mba, forever immortalised after scoring the winner in the final against Burkina Faso.

Mba was supposed to be at the Chan tournament but signed for the club at the bottom of the French second division just days before the final selection was made and ruled himself out of a return trip to South Africa.

They have what it takes
Keshi likes to tease before matches like this, playing up the qualities of the opponents and their coach and, at the same time, underplaying his own team’s qualities.

On Wednesday, he asked reporters at the post-match press conference: “Who are we playing next? No, seriously, this is a different tournament and you can’t compare this Nigeria side with last year. South Africa have massive advantage in terms of experience, the fact their league only stopped in December and their players are still in condition. They have what it takes. We’ll need a high level of concentration to overcome South Africa.”

His laissez-faire attitude contrasts with the nervous intensity of Gordon Igesund, who did himself no favours with a strange switch on Wednesday, reducing the team to one recognised striker in Bernard Parker by taking off Edward Manqele literally seconds after Mali had scored an equaliser.

The introduction instead of Moroka Swallows hardman Asavela Mbekile meant South Africa were playing with three defensive midfielders at a time when more creativity was needed in attack to try to restore the lead.

Tactical blunder​
Eventually he pushed a tired-looking Matthew Pattison forward and introduced Lerato Chabangu but Bafana ran out of time.

Rarely does Igesund make a tactical blunder but his new-found penchant to err on the side of caution could yet come back to haunt him. Making four changes after the weekend win over Mozambique also seemed unnecessary.

Tiredness was also evident from Siphiwe Tshabalala. Two matches in five days seem to have sapped him of energy. His club Kaizer Chiefs will have plenty of that ahead in the next months with a tortuous club schedule awaiting them.

Still, this is a tournament set for South African success.

The team is vastly more experienced and talented than most of the selections.

Indeed, some of the football has been dire and there are few players who have made a strong impression on the gallery of PSL coaches keen to strengthen their squad with some foreign talent. But there are still two weeks to go.

Schumacher will never be the same

Zimbabwe through to Chan quarterfinals