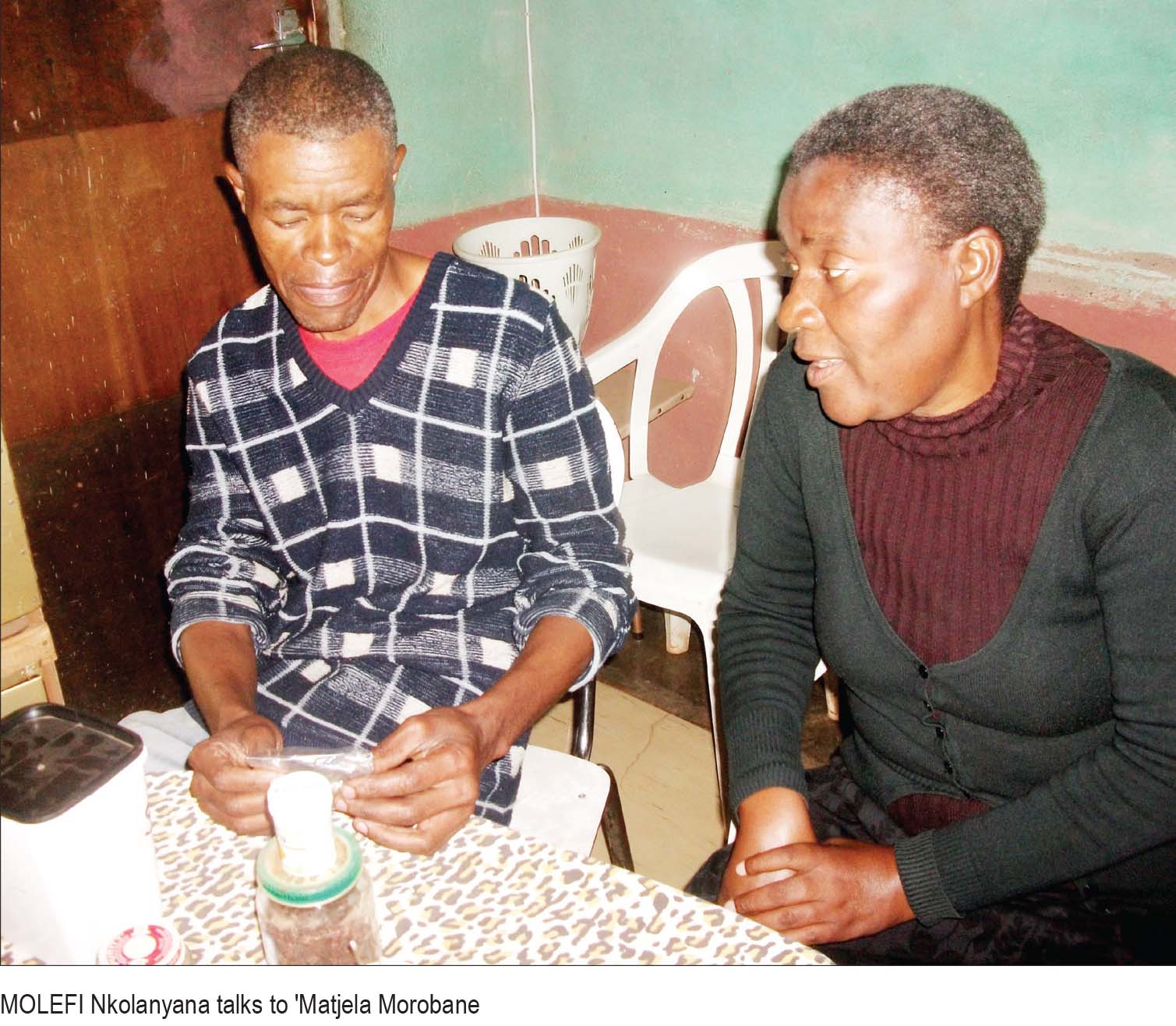 MASERU — Some desperate cancer-patients are resorting to the traditional way of treatment due to fear they might not survive the “complex” medical therapy.
Most cancer patients are referred to Bloemfontein, South Africa, for advanced treatment, such as chemotherapy, radiation-therapy and surgery.

However, the Lesotho Times has found out some patients are reluctant to go to South Africa for fear they might not survive the treatment process and also because they would not feel comfortable in such unfamiliar conditions.

Consequently, such patients are now pinning their hopes on traditional and herbal-based treatment, which they believe could cure them without having to undergo the “feared” medical remedy.
Cancer is currently a major problem in most African countries, many of which do not provide all treatment options while late-detection of the disease is also another complicating factor.
However, in Maseru, some traditional healers are filling the gap created by limited cancer-treatment services in the country and insist they can cure most types of the disease — a claim which has been disputed by some medical doctors and researchers.

Molefi Nkolanyana of Qoaling in Maseru is one such traditional healer who claims he can cure most types of cancer.
Nkolanyana’s concoction costs M100 per litre, and the famous healer says his herbs can cleanse the body of cancer and then help build cells damaged by the disease.

The healer this week said he receives patients who are not willing to travel to South Africa for medical treatment and those who would have already received treatment but failing to respond to the therapy.
“I mainly receive breast and cervical cancer patients and when they are here, they tell me traditional medicine is their only hope.
“Through my medicine, I have treated a number of patients locally and also in South Africa,” Nkolanyana said.

The herbs he uses, Nkolanyana said, are locally available and treatment can last up to six months depending on the progression stage.
“If patients come early, they can take less litres of the medicine in four months, following which they can still receive other treatments depending on how they respond to the initial treatment.
“Some of my patients who come back for check-up, would show no signs of cancer. I always tell them to return to the hospital for further tests, some of which have since confirmed they are cured,” Nkolanyana said.
‘Matjela Morobane, 53, was at Nkolanyana’s home awaiting treatment, when the Lesotho Times paid the healer a visit on Friday last week.

Morobane was diagnosed with cervical cancer at the Queen ‘Mamohato Memorial Hospital in April last year, and referred to a Bloemfontein medical facility, but would not go.
“I didn’t immediately know that my life had taken a rough turn. I started making enquiries and also discussed the matter with my family.
“What troubled me was that I did not get any positive explanation regarding my intended travel to receive treatment in South Africa.
“All I heard was how many patients who went there came back worse-off and that some would even die weeks later.
“My family never supported the idea of my receiving treatment in South Africa, so I ended up aborting the trip,” Morobane said.

Although her explanation might sound primitive in some quarters, it still demonstrates the perceptions many Basotho hold about cancer and its treatment.
Morobane said her condition worsened in June last year, prompting her family to take her to Nkolanyana.
“I was bleeding so much and looked wasted. A family friend told me about Nkolanyana and how he was helping a lot of cancer patients, and that is how I ended up here,” Morobane said.

Morobane claimed after taking Nkolanyana’s herbs for a month, the bleeding stopped, while the pain would disappear but return a few days later.
“I was taking three cups of medicine three times a day. I am here today because I sometimes experience abdominal pain and have to take some painkillers to get better. While my problem was bleeding, I am now having clots of blood. I believe what I am experiencing are the effects of the treatment,” Morobane said.

Despite signs that she is yet to be cured, Morobane said she has to “believe in something” to give her the strength to defeat the disease.
“I am feeling much better now. I am here because I believe Ntate Nkolanyana‘s medicine is going to cure me.”
Nkolanyana is not the only traditional healer who claims he is able to cure cancer.

Lethole Maema, 43, of Mazenod, also claims he has a cure for cancers such as cervical, breast, prostate and genital, and charges between M100 and M250 for a variety of his herbs.
“My grandfather, who was a traditional healer, taught me about herbs that can cure cancer.
“I have helped many patients, including those who come after receiving failed treatment outside the country. Although a lot of people now treat cancer as a new disease, the fact is it has been in existence for many years and our forefathers would treat it using herbs. This is exactly what I am doing now,” Maema said.

The major challenge he faces, Maema said, is some patients come to him “very late” when the disease is at an advanced stage and as a result, his medicine might not be as effective as it should be when one consults him early.

One of his patients, aged 30 and who spoke on condition of anonymity, said she was also diagnosed with cervical cancer last year but was not “brave enough” to go through with chemotherapy because of the many scary stories she had heard after its repercussions.
“I have a friend who died after undergoing chemotherapy and a brother who also passed on after receiving cancer-treatment in South Africa four years ago.
“Their deaths traumatised me and I don’t want to have anything to do with chemotherapy, which is why I am here,” she said as she waited for Maema at his Mazenod home last Friday.
The woman revealed she has been visiting Maema for treatment since November last year and is getting better.
“What I like about this place is the personal attention, counselling and assurances that I will get better. I also like the fact that I can come and be helped immediately when I notice something wrong. I believe with time, I will be cured,” she said.

The Ministry of Health Disease Control Director, Dr Mosilinyane Letsie, this week told the Lesotho Times government was aware of the challenges faced by cancer patients due to limited treatment-services locally.
Dr Letsie said while every citizen had rights to choose where to seek treatment, it was also the Ministry’s responsibility to provide life-saving advice to the public.
“As a ministry, we do not have anything against traditional healers or herbalists, but our problem is there is no scientific evidence to prove their claims that they can cure cancer,” she said.

Dr Letsie further noted that due to misconceptions and misunderstandings that sometimes leave patients with no choice but to seek services away from clinics and hospitals, government was working with some traditional healers to dispel some myths about medical cancer treatment.
“In some areas, we are cooperating with some traditional healers at primary healthcare level. We believe it is important that they advise patients correctly by telling them to go to the clinics where they would get medically-proven treatment. Importantly, people should be aware that cancer is a curable disease.”

Dr Letsie emphasised the importance of regular screening to enable early detection and possible treatment locally.
“What we are seeing is that some cancers are detected when the patients are already very sick, and this might compromise the treatment outcome. However, even in cases where patients come late, there is a chance that if they receive the correct treatment, they can get well.”

Meanwhile, research shows that cancer, known medically as malignant neoplasia, is a broad group of diseases involving unregulated cell growth.
In cancer, cells divide and grow uncontrollably, forming malignant tumors, which may invade nearby parts of the body. The cancer may also spread to more distant parts of the body through the lymphatic system or bloodstream.

Not all tumors are cancerous — benign tumors do not invade neighbouring tissues and also don’t spread throughout the body. There are over 200 different known cancers that affect human beings.

The causes of cancer are many, complex, and only partially understood. Among the common causes of cancer, or behaviour that increases the risk of cancer, are tobacco use, dietary factors, certain infections, exposure to radiation, lack of physical activity, obesity, and environmental pollutants.
These factors can directly damage genes or combine with existing genetic faults within cells to cause cancerous mutations.
“Approximately 5–10 percent of cancers can be traced directly to inherited genetic defects, while many cancers could be prevented by not smoking, eating more vegetables, fruits and whole grains, eating less meat and refined carbohydrates, maintaining a healthy weight, exercising, minimising sunlight exposure, and being vaccinated against some infectious diseases.
Cancer can be detected in a number of ways, including the presence of certain signs and symptoms, screening tests, or medical imaging.
Once a possible cancer is detected, it is diagnosed by microscopic examination of a tissue sample. Cancer is usually treated with chemotherapy, radiation therapy and surgery.

The chances of surviving the disease vary greatly by the type and location of the cancer and the extent of disease at the start of treatment.
While cancer can affect people of all ages, and a few types of cancer are more common in children, the risk of developing the disease generally increases with age.

In 2007, cancer caused about 13 percent of all human deaths worldwide (7.9 million), with the rates rising as more people live to an old age and as mass lifestyle changes occur in the developing world.
But as emphasised by Dr Letsie, it is important to remember that cancer is a treatable disease and should never be considered a death sentence.