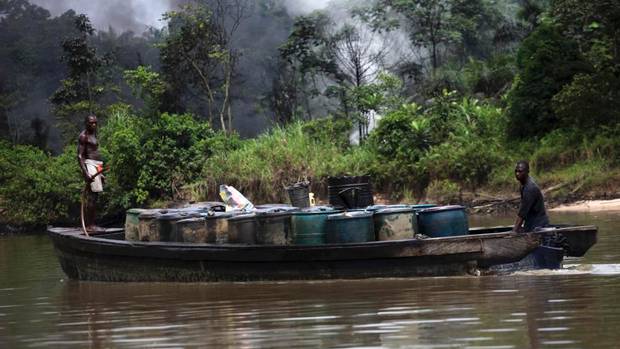 Illegal transfers from African countries have tripled since 2001, when $20 billion was siphoned off, according to a report released by the African Union’s (AU) high-level panel on illicit financial flows and the UN economic commission for Africa (Uneca).

The report was praised by civil society groups as the first African initiative to address illicit outflows from the continent.

In total, the continent lost about $850 billion between 1970 and 2008, the report said. An estimated $217.7 billion was illegally transferred out of Nigeria over that period, while Egypt lost $105.2 billion and South Africa more than $81.8billion.

Trade mispricing, payments between parent companies and their subsidiaries, and profit-shifting mechanisms designed to hide revenues are all common practices by companies hoping to maximise profits, the study said.

Nigeria’s crude oil exports, mineral production in the Democratic Republic of the Congo and South Africa, and timber sales from Liberia and Mozambique are all sectors where trade mispricing occurs.

Former South African president Thabo Mbeki, who chairs the panel, said: “The information available to us has convinced our panel that large commercial corporations are by far the biggest culprits of illicit outflows, followed by organised crime. We are also convinced that corrupt practices in Africa are facilitating these outflows, apart from and in addition to the related problem of weak governance capacity.”

Criminal networks engaged in drugs and human trafficking, animal poaching, and theft of oil and minerals also contributed to money leaving the continent.

African and non-African governments and the private sector – including oil, mining, banking, legal and accountancy firms – were all involved in schemes designed to launder money and avoid paying corporate tax, according to the study.

More than $1 trillion was siphoned off globally through illegal schemes between 2007 and 2009, the report said, noting that lost African revenues comprised 6 percent of that total. But the authors cautioned that poor data and complicated laundering networks could make the amount much higher.

“Illicit financial flows from Africa range from at least $30billion to $60billion a year,” the report said. “These lower-end figures indicated to us that in reality Africa is a net creditor to the world rather than a net debtor, as is often assumed.”

The report called for the UN to crack down on European and US firms that engage in tax avoidance and money laundering.

Joseph Stead, senior economic justice adviser at Christian Aid, said: “This is the first time that African countries have spoken out so strongly and in unison about how these financial crimes are hurting their people. That is a big deal.

“From now on, it will be much harder for the Organisation for Economic Co-operation and Development and other rich country groupings to argue that tax dodging, corruption, money laundering and so on are not a top priority for African governments.”

“Oxfam estimates that Africa alone is losing almost half of the global $100billion of annual illicit financial flows,” she said.

The bulk of Africa’s illicit transfers originated from west Africa, where 38 percent of all funds leaving the continent were generated. Profit-making activities in north Africa accounted for 28 percent of the flows, while southern Africa, central Africa and eastern Africa each made up about 10 percent, the report showed.

Global Financial Integrity president Raymond Baker said the report represented a historic moment in the effort to fight Africa’s “most pernicious economic problem”. “This is a turning point in the movement to curtail illicit financial flows and promote financial transparency, both within Africa and globally,” he said.

The high level panel was founded by the AU and Uneca in 2012. – Guardian