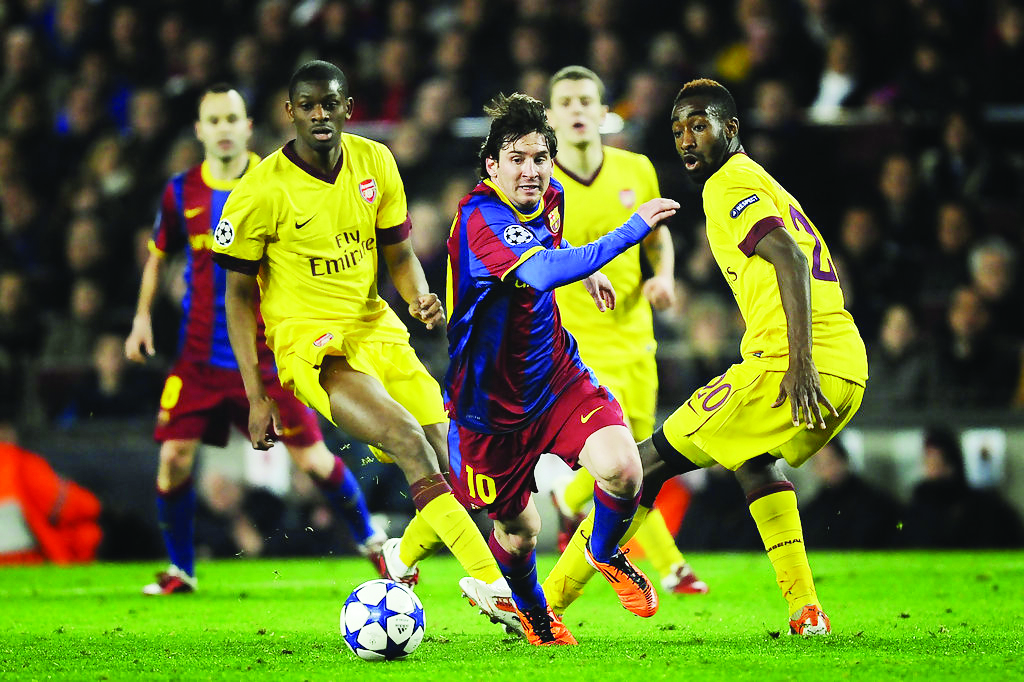 BARCELONA- Holders and Spanish league leaders Barcelona will play Premier League leaders Arsenal in the last 16 of the Champions League, 10 years after the sides faced each other in the final, following Monday’s draw for the first knockout stage.

Spanish league leaders Barcelona, chasing a sixth title, prevailed 2-1 in the 2006 final at the Stade de France in Paris and also triumphed in the knockout phase in 2010 and 2011.

Chelsea, who are enduring a torrid time in the Premier League, will face French league leaders Paris St Germain in the knockout stages for the third year in succession after the French champions triumphed at the same stage last season and the London club had the upper hand in the quarterfinals the previous year.

Another clash between big guns will feature former winners Juventus and Bayern Munich, while 10-time champions Real Madrid were drawn against AS Roma.

It is the game between the pacesetters in Spain and Arsenal which most catches the eye, however.

“We are certain to see a sporting spectacular,” said Barca director Albert Soler.

“Arsenal and Barcelona have a similar style of play. The fans will enjoy themselves, we’re two sides with a similar understanding of the game. They will be two great matches. We must have maximum respect for Arsenal.

“Barca are used to playing under pressure in every sense. But we are the reigning champions and that gives you an edge.”

Arsenal club secretary David Miles said: “It is not easy and the one to avoid at this stage, but it is up to us and we will give them a game.

“Messi, Neymar, Suarez… you could go on, but we have our own world-class players and I am sure they will be fantastic games in London and Barcelona.”

There is also a familiar feel about the Chelsea v PSG tie.

“There is not much we don’t know about Paris,” said Chelsea general secretary David Barnard.

“You only know if it’s a good draw after the tie. We are ambitious, we have two-and-a-half months to prepare,” PSG sports director Olivier Letang said.

Real Madrid and Roma have also seen a lot of each other in the competition, though not since 2008 when the Italians won 2-1 home and away in the last 16.

“You have to be very much on your guard. If we see ourselves as favourites things won’t go well for us,” said Real director Emilio Butragueno.

“We know what can happen if you have 10 poor minutes on a European night.”

Juventus could come to regret having blown their finale in the group stage, leaving Manchester City, who will take on Dynamo Kiev, with the better draw on paper.

“Everybody wanted to avoid Barca and Bayern so we are not so lucky but Bayern will not be glad they drew Juve,” said Juventus ambassador Pavel Nedved.

Manchester City director of football Txiki Begiristain said: “They have a good side (Kiev)and it will be difficult for us. They are growing in the competition and it will be a big challenge but we hope to be ready.

“They are a strong side, but they like to play football and it is just 11 v 11. We are improving and gaining experience in the competition so we hope to do well.”

PSV Eindhoven will take on Atletico Madrid and Benfica will be against Zenit St Petersburg.

Gent, in their first participation in the competition, will take on Germany’s VfL Wolfsburg.

The first legs of the ties are spread over four days in February, with the returns on March 8, 9 and 15, when there are two matches.-SuperSport

‘We face a harsh reality’