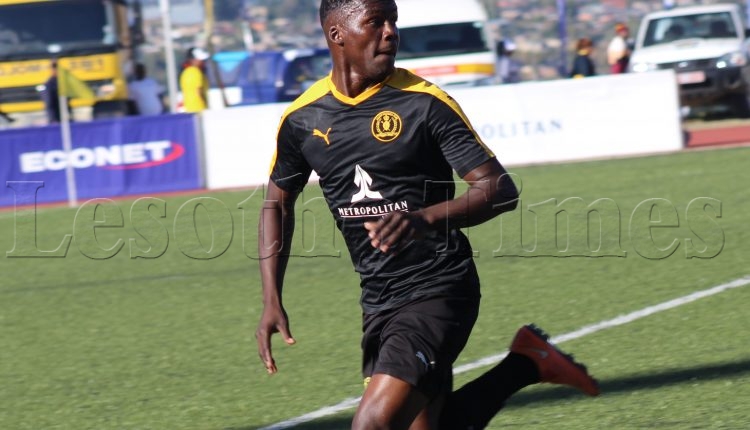 LIKUENA and Bantu defender Mkhwanazi Motlomelo will today appear before the Hlotse Magistrate’s Court for allegedly assaulting his pregnant wife and stabbing his mother.

According to sources close to the family, the stocky defender assaulted his wife who is also a member of the Lesotho Mounted Police Service (LMPS) a fortnight ago. While he was assaulting his wife, his mother tried to intervene and he stabbed her with a knife.

“I am not sure what the fight was about but he was beating his wife and when his mother tried to intervene, he stabbed her,” the source said.

“The mother was rushed to a local hospital in Maputsoe where she was admitted for three days.”

Mkhwanazi re-joined Bantu in January following an unsuccessful spell with the GladAfrica Championship side, Tshakhuma Tsha Madzivhandila (TTM) which he joined at the beginning of the 2019/20 season.

“The perpetrator will appear before the Hlotse Magistrate’s Court tomorrow (today) where he will be charged for assault.

“From what we were told, on the day in question the perpetrator tried to call his wife while he was at home but failed to reach her. When she finally arrived home, he started assaulting her.

“When his mother tried to intervene, he allegedly stabbed her and she was rushed to a hospital where she was admitted for three days,” Mopeli said.

He said the defender will only be charged for assault as his mother will not press any charges.

“His mother says her son made a mistake and will not be pressing any charges against him.”

Supt Mopeli said it was sad that the incident happened while the world is busy coming up with initiatives to raise awareness against gender-based violence.

“The worst part is that the lady who was assaulted is pregnant. The LMPS has been raising awareness on gender-based violence and unfortunately there are people who still think assault is the way of resolving disagreements.

“It is also unfortunate that people lay charges and later withdraw them while other refuse to lay charges completely as a way of protecting their loved ones. That sets a bad precedence,” Supt Mopeli.

Artistes must stop working from a hunger perspective