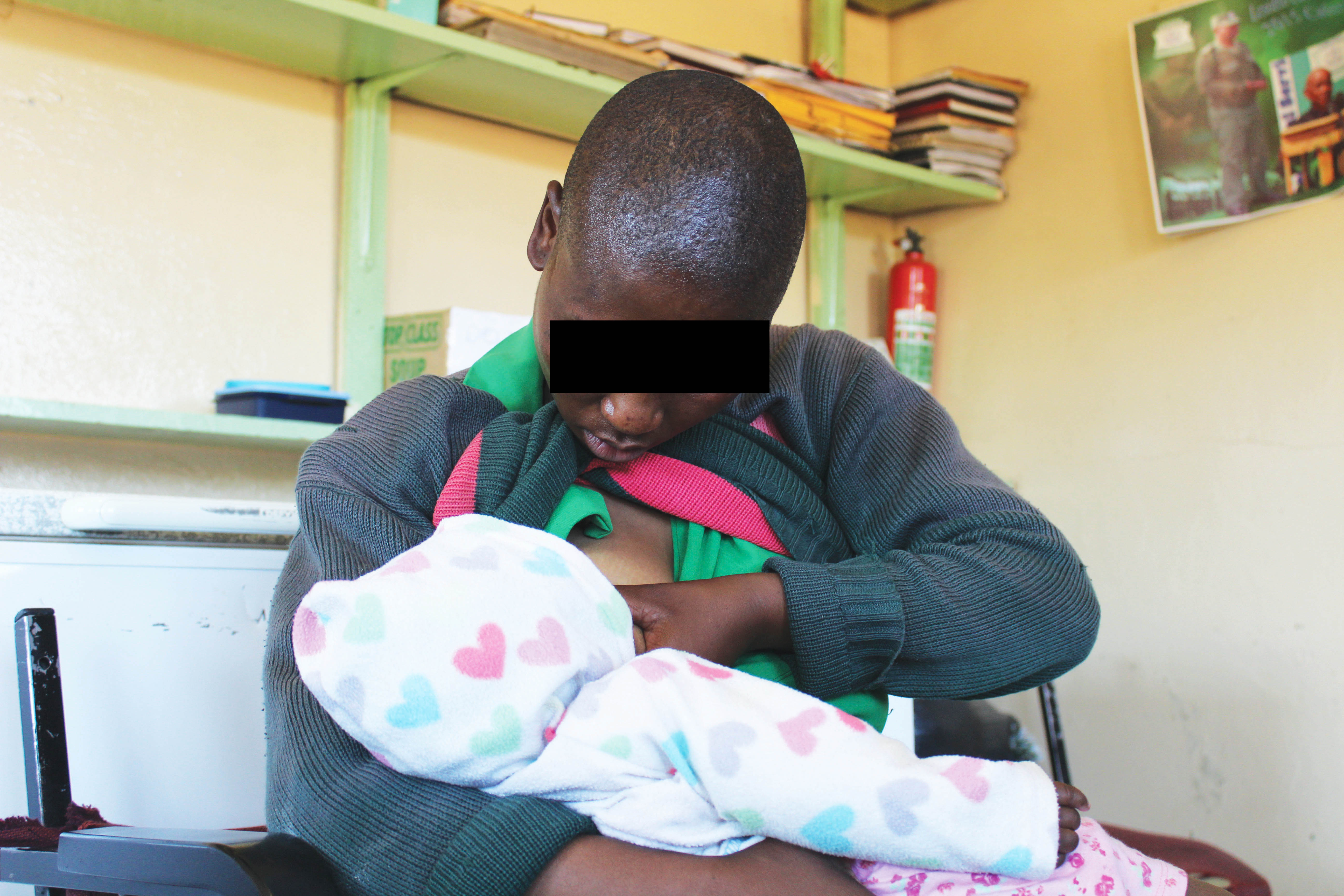 THREE baby-girls under the age of one year are languishing in the Lesotho Female Correctional Service in Maseru alongside their mothers who are serving time for various offences.

Although the babies are old enough for a diverse diet other than their mothers’ breast milk, the only food at their disposal is what their mothers eat, pasteurised milk donated by a ‘Good Samaritan’ and some fish.

One of the women was sentenced to four years in jail for assaulting her 10-year-old niece. She was two months pregnant at the time of her sentence.

The child is now 11 months old and knows no other life other than the correctional facility. She is set to remain behind bars until the age of two years when, according to the facility’s regulations, all children are released due to lack of amenities which cater for minors weaned of their mothers’ breast milk.

It is not clear who will look after the child as her mother is a single parent whose family is already struggling to provide for her other two children aged six and four years in Quthing.

The other baby in the correctional facility is nine months old, and was locked up together with her mother when she was only three months of age. Her freedom was taken away because her mother, aged 39, had stolen clothes worth M10,000 from her employer in Maseru where she was working as a housemaid. She was sentenced to five years in jail. There was no one to look after the baby whose four siblings had dropped out of school due to difficult circumstances hence her presence in the correctional facility.

The baby is set to spend the next 15 months in the facility until she also turns two years and then released to an equally uncertain future.

The third baby in the correctional facility is six months old. She found herself at the facility in October this year when her mother was sentenced to four months for abandoning her when she was just two months old.

In an interview with the three mothers this week, it was clear they were not happy with how their actions were affecting their children.

While pregnant and breast-feeding women reside in their own facility, they also mix with other inmates with various criminal backgrounds, raising serious concern for their safety.  One of the mothers said she feared for her child as one of the inmates murdered two girls below the age of seven in 2013 and 2015.

The woman alleged the inmate in question was found staring at one of the babies who was asleep after she had earlier been spotted looking for a knife– a weapon she used to cut the throats of the two children she confessed to murdering.

“Living with my baby here is difficult because I don’t feel that she is safe,” the 39-year-old mother said.

She explained how helpless she felt since her baby could only have a difficult upbringing if she is released from the correctional facility.

“I know that raising a child within this facility is not fair on her and at the same time, her going away will equally devastate me because how will she cope in my absence.”

The mother of five would like to take hairdressing training classes offered at the correctional facility but cannot attend because there is no one to take care of her baby.

“I am hoping to learn hairdressing so that when I am released in 2022, I will be able to start my own business,” she said.

Apart from participating in various skills development activities, all the 58 female inmates receive counselling from social workers which helps them to accept their circumstances, co-operate with others and encourage them not to return to a life of crime upon their release. The social workers also visit their homes and bring them news on their families, an initiative meant to also make way for the inmates’ reintegration into their communities after their release.

However, for the 23-year-old mother of the 11-month-old daughter, the correctional facility has ironically offered her a better life. Although she is not happy that her baby is in prison, the woman said at least she was able to receive antenatal care, in addition to delivering her baby at Queen ‘Mamohato Memorial Hospital and receiving clothes for her daughter. When she was pregnant with her other two children, she did not access health services and even delivered them at home, the woman added.

The woman further said ‎she also learnt a lot about sexual reproductive health, services she was unable to access in her home area in Quthing.

“I have learnt about birth control and HIV-prevention. I am grateful. I would now like to do my secondary education and leave this place empowered,” she said.

The mother-of-three grew up an angry person after her mother died when she was only seven years of age. Life became difficult when her father decided to remarry before he moved out of the family home, leaving the three children at the mercy of relatives, she said.

“I dropped out of school after completing primary education and was subjected to a difficult life, which made me a bitter person. To escape my difficult circumstances, I got married thinking my problems would go away.” Young, uneducated and without a job, her situation worsened and she was soon to realise the man she had married, a livestock-herder, could not offer her a life she had imagined but only sorrow.

Desperate to save her children from hunger, the woman stole a 12.5 kg bag of maize meal one day in 2014, which led to her arrest.

She was sentenced to five months in jail and after her release, found her husband staying with another woman. She had no choice but to return to her family with her children. In 2016, she was two months pregnant with another man’s child when she was arrested for assault with intent to cause grievous bodily harm.

The plight of the mothers in detention, together with their babies makes sad reading.

According to Superintendent ‘Marethabile Tale of the Lesotho Female Correctional Service, the organisation wishes to partner with various actors to ensure the women at the correctional facility received increased support both within the facility and after their release.

“There is need to strengthen our empowerment programmes because most of these women are vulnerable. We also need support to improve the living conditions of the babies through establishing child-friendly facilities such as a nursery and a pre-school, where they can be looked after by our officers. A nursery would cater for children under the age of two while those weaned of breast milk can spend much of their time playing and learning in the pre-school,” Supt Tale said.

She said this would also enable the mothers to participate in the various skills development programmes offered at the correctional facility.

Commenting on the plight of the babies, the Member of Parliament for Matsieng Number 45, ‘Matsepo Molise-Ramakoae said there was need to ensure the protection of women and children.

“Protection comes in various forms and we need to start by ensuring that women and girls are protected from conditions that can push them into making bad decisions out of desperation,” Ms Ramakoae said.

She said the story of the 23-year-old inmate and that of the other women in the correctional facility are real life stories that reflect on weaknesses of programmes supposed to address poverty and ensure the empowerment of women and the girl-child. She explained the need to work towards breaking intergenerational poverty through programmes that would ensure girls remain in school, through tertiary education, to prevent early marriages that perpetuate poverty and increase incidences of HIV and unwanted pregnancies.

“Oftentimes, there is a lot of talk and promises to work towards poverty alleviation, but I think we need to do more to target the real people in need of support. We should work towards preventing situations that would see women incarcerated together with their babies simply because the mother stole a bag of maize meal, for example. That our correctional facilities are overflowing reflects on some socio-economic challenges that require firm policies and real implementation of well-targeted programmes. Without effective interventions, we are likely to see the children of the same mothers suffering worse than their parents,” Ms Ramakoae said.

She said the bulk of women and girls in need of support were based in the rural areas, and yet it seemed, for many years, programmes working to create and support small businesses have focussed on people in the cities.

“The services or interventions should be directed where they are needed the most. Rural women have demonstrated that they are organised and what they need is support for them to be able to create wealth. We need to divert our political energy to the real bread and butter issues and exert force on reducing poverty through ensuring that girls and boys from poor families have access to secondary and higher education.”

Education, she said, was one resilience building mechanism that can effectively help both women and men to fight most vulnerabilities currently affecting most people.

“Having ineffective systems that deny children adequate education will promote vulnerability and cause the government to perpetually provide social protection in addition to investing in caring for many people that end up in correctional facilities. It is a concern that we have some people who now prefer to stay in jail where they can at least have three meals per day. That is a huge responsibility and a massive strain on the national budget,” Ms Ramakoae said.

Your information is safe with us: mobile services operators

Basotho should be worried about Matekane’s party: Thotanyana