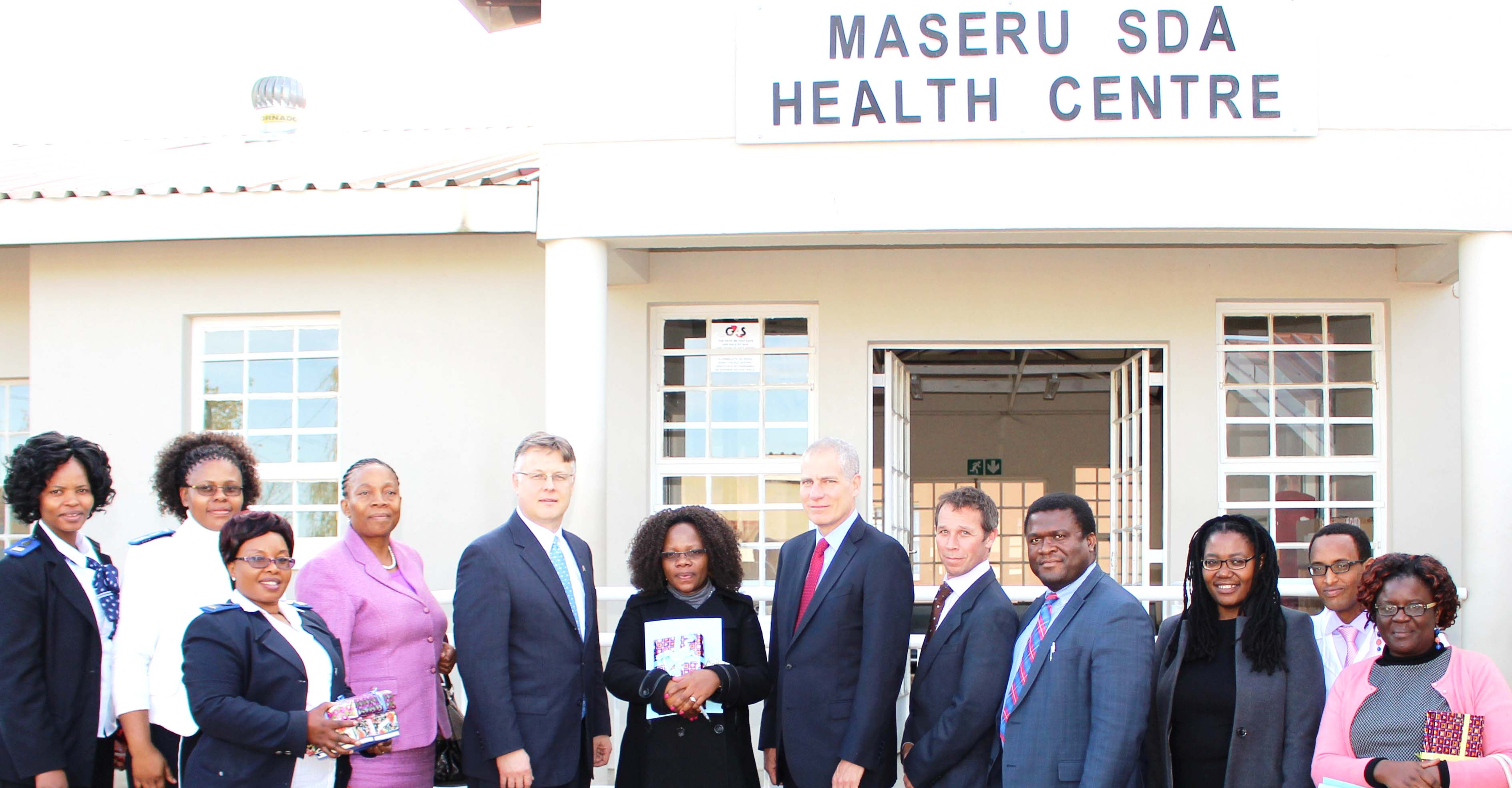 The American government will continue to support Lesotho’s fight against HIV/AIDS through its President’s Emergency Plan For AIDS Relief (PEPFAR).

According to the United States (US) Deputy Assistant Secretary for Southern Africa and Public Diplomacy Todd Haskell who visited Maseru this week to see the impact of PEPFAR’s support and the Millennium Challenge Corporation’s (MCC) renovation of health centres under Compact One completed in 2013, Lesotho’s healthcare had improved significantly through the two initiatives.

Also in attendance was a representative of the Lesotho Network of People Living with HIV/AIDS, and Maluti Adventist Hospital Nursing Services Coordinator ’MatsekoTom-Moseneke.

The group was taken on tour Maseru SDAHC by the Nurse-in-Charge, ‘Makarabo Khoeli, who explained the various services offered at the facility.

PEPFAR is the US government’s initiative to help save the lives of those suffering from HIV/AIDS around the world. The largest initiative by any nation to combat a single disease internationally, PEPFAR investments also help alleviate suffering from other diseases and are driven by a shared responsibility among donor and partner nations to save lives.

The American government has previously expressed concern over Lesotho’s security situation which saw three opposition leaders—Thomas Thabane, Thesele ‘Maseribane and Keketso Rantšo of the All Basotho Convention, Basotho National Party and Reformed Congress of Lesotho, respectively—fleeing for South Africa in May last year, saying they feared assassination by members of the military.

Certain sections of the population now fear the Americans could withdraw assistance to Lesotho because of these concerns since the aid comes with conditions there is political stability in the country.

However, Mr Haskell told the Lesotho Times that America’s assistance in Lesotho’s battle against HIV/AIDS was not conditional.

“One thing we are clear about is that our concerns about those issues (political stability) have nothing to do with PEPFAR. We are very committed to our cooperation in the health sector. And that is something that is going to remain no matter what. That’s our commitment,” Mr Haskell said.

“Here we are congratulating the Lesotho government on its efforts in the health sector and we are going to stand side by side with them moving forward.”

Mr Haskell further commended Lesotho for implementing the test-and-treat policy in April this year which he said was a positive development in the fight against HIV/AIDS. At 23 percent, Lesotho has the second-highest HIV prevalence in the world behind Swaziland’s 26 percent.

“This is a partnership; it is not only the United States coming in to help. In fact, I have met a lot of impressive people here in Lesotho who are doing very important work in fighting HIV and AIDS.

“When I look at the work being done, it really warms my heart that the collaboration between the United States and Lesotho is so strong and it is achieving so many important milestones.

“We are in this together, and so together we are going to move forward with the HIV test and treat programme. Everybody agrees that the test and treat is a good approach.

“I understand Lesotho is the first country on the continent to go for the test and treat initiative and that means so many people are going to be getting care.

“So many more people are going to be aware of their results and avoid so much tragedy. It’s a good step forward.

“I want to personally congratulate the Lesotho government for moving so quickly ahead,” Mr Haskell said.

For his part, Ambassador Harrington said Lesotho was among the few countries whose PEPFAR funding is not being reduced.

“It is important to us that we are making this progress in the health sector. The budget here is going up. We are going to continue working together. In other countries, PEPFAR budgets are decreasing, but not here in Lesotho,” said Ambassador Harrington.

Meanwhile, Maseru SDA Health Centre Nurse-in-Charge Khoeli explained the services offered at the facility such as HIV-testing, Tuberculosis screening and treatment, general services for people living with HIV that include monitoring patients on treatment by ensuring they take their medication.

“As a result of the refurbishment of this facility, we are now delivering babies here and have five houses for nurses and two accommodation facilities for expectant mothers. We also offer comprehensive antenatal and postnatal care, family planning and prevention of mother-to-child transmission treatment programmes,” said Ms Khoeli.

One of the pregnant HIV-positive women who was receiving services during the tour told Deputy Assistant Secretary Haskell that with the commitment of PEPFAR and quality services offered at the new clinic, she was confident of giving birth to an HIV-free baby.

She further said the test-and-treat initiative would also go a long way towards changing the lives of many HIV-positive Basotho and guarantee them a longer lifespan.

On her part, Dr Letsie commended the immense contribution the MCC-funded upgrading and refurbishment of health facilities across the country had brought to Lesotho’s health delivery system.

“As a result of the refurbishment of health centres and clinics across the country, rural communities who were never able to deliver babies in health facilities can do so today. We are going all out across the country to ensure all the targets are reached.

“The number of maternal deaths is decreasing. Today women have clinics that can furnish them with the necessary support and professional assistance,” she said.

Dr Letsie further noted the MCC funding covered the refurbishment of both government-owned health facilities and those owned by the Christian Health Association of Lesotho (CHAL).

“Support from the MCC covered CHAL and government clinics and today, as a result of the support, all the health facilities are the same,” Dr Letsie said.

She further noted the refurbishment had brought comprehensive health services closer to communities, even those in the most remote areas of the country.

“This development has also increased the number of health professionals’ housing facilities. In the past, due to several shortcomings, quality in the health sector was compromised.

“But today we can now house five midwives and they have room to do their work and offer diverse services to patients at one health centre” Dr Letsie said.

Dr Letsie also said the Health Ministry was urging the Ministry of Energy to install electricity in rural areas where clinics are located to ensure they have power at all times, which is critical in preserving drugs and operating machinery, among others.

She further noted her Ministry had urged the Local Government Ministry to construct roads across the country to make clinics easily accessible.

“We are employing a rounded, people-centred approach to ensure all stakeholders at the grassroots are engaged,” said Dr Letsie.

“Right now we are going all out to engage local chiefs, councillors, the general public, and other government ministries.

“So we are working on a people-centred approach now to ensure better service-delivery in the health sector.”