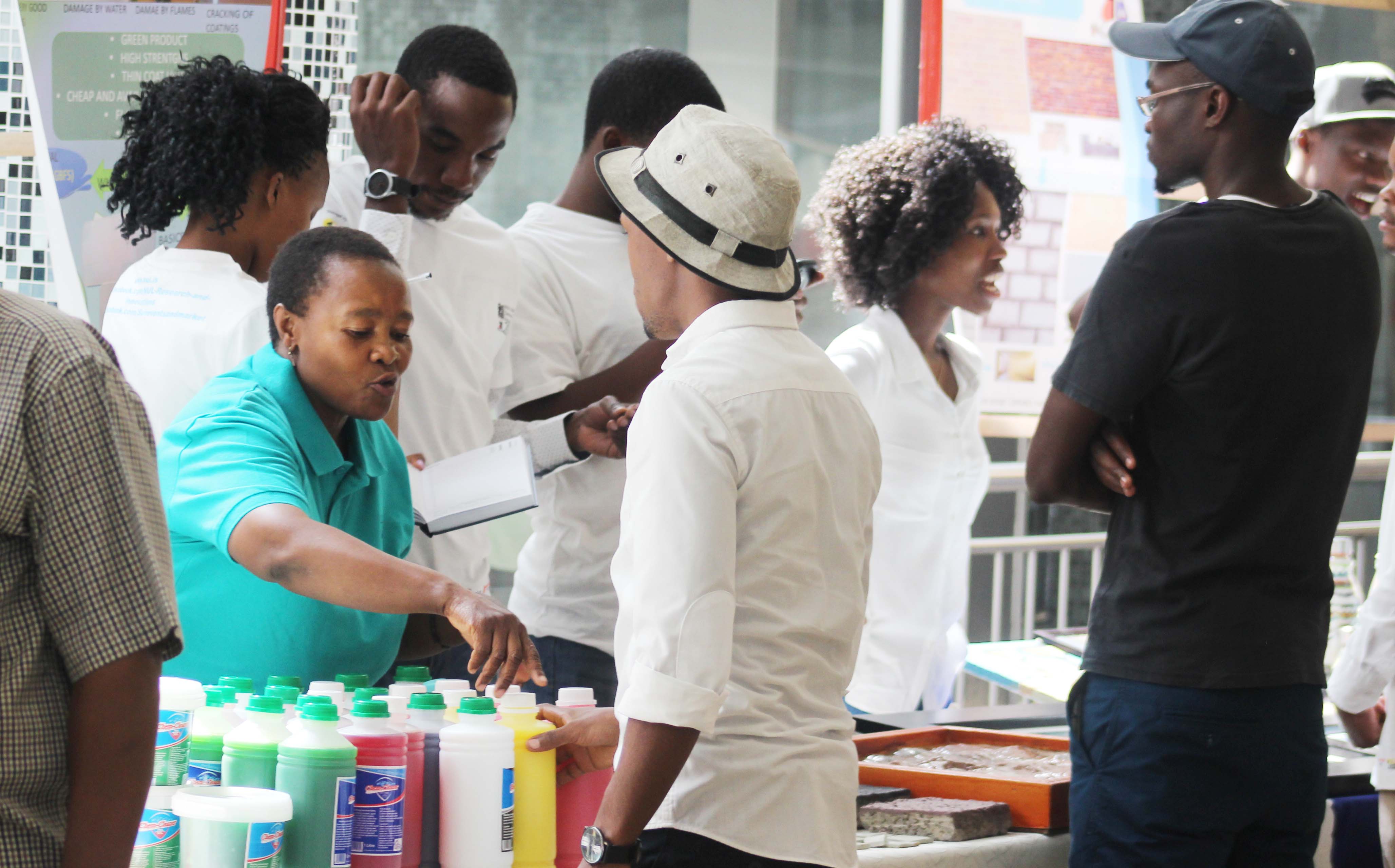 COLLABORATIONS between higher education institutions (HEIs) and the private sector are key in unlocking business opportunities in Lesotho.

This is according to National University of Lesotho (NUL) lecturer and scientist Dr Mosotho George in his published academic paper: “From Resource Scarcity to Abundance of Opportunities for Applied Science in a Financially-Strained Environment: The Case of Chemical Sciences in Lesotho.”

In the paper, Dr George states collaboration between the two entities would result in mutual benefits such as new products and internship programmes for students among others.

He says the partnerships would also uplift the generally under-funded HEIs such as NUL that often struggle to provide students quality education.

“With the never improving capital investment towards public institutions of higher education in most African countries, the level of infrastructure in the universities thwarts academic programmes in the applied sciences,” notes Dr George.

“These programmes require that students be afforded some industrial experience or internship programmes while, at the same time, continuing the learning process through research projects supervised by both the industrial and academic supervisors.

“These requirements become almost impossible to fulfil without the necessary infrastructure. This is the case in small countries like Lesotho, which do not have sufficient science-based industry; as such these programmes are severely affected.”

For the past few years, he says, NUL attempted several restructuring strategies aimed at modelling the university into a top-ranking institution that produces qualified graduates.

“Recently the university established the Annual Science and Technology Innovation Expo aimed at enhancing the general appreciation of the role of research and development in science and technology towards economic transformation which saw science students demonstrate artefacts and science, technology and innovation products produced inside the campus’ laboratories.”

Dr George says since embarking on the initiative, a noticeable boost in science-related industries took place.

“The initial attempt of this approach has demonstrated considerable potential, with students engaging with small enterprises in areas such as waste recycling, food processing and testing, and leather tannery, to mention only a few,” he says.

“Hence, the programme has witnessed a positive turn from resource scarcity to abundance of opportunities, proving that financial scarcity does not necessarily translate into a corresponding scarcity of ideas.”

Dr George reveals that to date, the NUL expo paved the way for the production and potential mass production of items in the following sectors:

“Lesotho has been consistently plagued with food insecurity over the past two decades; hence a policy shift towards promotion of agriculture is widely regarded as necessary for the economy,” he notes.

Food spoilage, Dr George says, was also an obstacle to the attainment of food security.

“For example, post-harvest loss in Rwanda was reportedly between 25 percent and 50 percent in 2013. A good opportunity, then, for science-based HEIs would be in the areas of post-harvest treatment/processing of foodstuff, processing of dairy products, meat products, fruits and vegetables,” he says.

“Due to the minimal use of chemicals in food production, most Lesotho products are highly valued internationally as they are considered safe and often classified as ‘organic’. Currently some processed (canned) fruits are exported to Europe, although the production scale is still too low to make a considerable impact on the economy.

“Only one local cooperative has partnered with the university for testing of their beverages, which are already in the market. These areas of collaboration and production of mutual benefit should be multiplied and explored further.”

Dr George indicates there were a lot of small-scale manufacturing ventures currently being undertaken by Basotho, “mostly by those who do not have basic or chemical sciences education”.

“A number of skin products, creams and lotions are being produced and sold in the local markets. However, these producers are constantly struggling to grow their business due to a number of factors, including lack of comprehension of the processes involved in manufacturing and limited business management skills.”

He says it is an area of potential collaboration that received a lot of attention from the university and local manufacturers.

“Recently a student took an internship with a small-scale detergent manufacturer and he managed to improve the production costs by over 10 percent after factoring all the stages of the entire production line including taxes,” states Dr George.

“The very same student went on to start his own small detergent manufacturing company and is still under the mentorship of the department, together with his peers that followed the same path.”

Due to its unique climate, he asserts, Lesotho produces some valuable and high quality varieties of herbs.

“There is high demand in Western Europe for Lesotho-grown herbs for medicinal applications, especially since the advent of HIV-AIDS. Lately, there is enormous production and sale of herbal medicines informally in the streets of major towns, and one does not miss the regular adverts for the same that have become part of regular radio programming in the country.

“Unfortunately, regulation regarding production and sale of these products is limited to those practitioners registered with the Ministry of Health. Most, if not all of the herbalists that prepare these medicines and sell in the streets or their homes, do not have any formal pharmaceutical, biological nor chemical knowledge.”

Dr George notes there was a deficiency of documentation about the composition, storage, expiry date, effect of exposure to different environmental conditions such as direct sunlight for the products.

“This situation is made worse by the fact that some of these herbs have been implicated in murder cases, whether homicidal or suicidal, posing serious challenges to the forensic investigations,” he says.

“Involvement of academia in efforts such as these could add some value and address some of these issues, presenting an opportunity for both producers and students.”

The impact of the textile industry on the environment remains a contentious issue, posing the dilemma of whether to enforce strict regulations by the relevant government ministries to the responsible factories and risk significant job losses. Since this industry is fully owned by foreign nationals, especially from China, the owners always threaten to close down when regulatory bodies try to enforce environmental laws and regulations. Instead of threatening these industries, efforts could be directed at reducing the environmental impact of their waste through collaboration with the university, which already has sufficient technological resources for monitoring of water pollution as well as finding ways of beneficiating this waste for further use. Perhaps, one could propose to use a fraction of the tax collected from this industry and plough it back into research in mitigation of the waste being produced. This could also provide some spill-off companies that can work on waste water treatment hence contribute to the economic stimulation.

The effects of climate change have led to an increasing imperative for the conservation of existing resources. Lesotho is no exception to this; the effects of climate change are widely recognized and appreciated even at grassroots level. As the world explores alternatives to fossil fuels, bio-fuel is receiving a lot of attention with unfortunately, some food crops being targeted as a source of these fuels, sparked further concerns about food security. Fortunately, there are suggestions that the conditions in many developing countries are ideal for growing algae for biofuels. As such there has been speculation about the potential for biofuels to reduce oil imports, stimulating rural economies, and thus reducing hunger and poverty. Biofuel generation harnessing the abundance of water resource endowment of the country is one of the potential areas for technological and economic development in Lesotho. There is currently one project that has received some funding from United Nations Development Programme under Global Environment Facility Small Grants Program. The project develops methods for biofuel production from sewage sludge using microbiological digestion, which seems more potent than the widely used natural means of biodegradation. While this area still needs further development, there is hope that with the amount of research in this area new applications and products will be created that will enable industry to sustainably harness Lesotho’s natural resource endowment.

Lesotho is endowed with a lot of stone resources ranging from softer Clarence to harder basalt rocks. These stones can be exploited in either engineered and carved products or even in the production of ceramics. The collaboration between the university and private sector in this area has been a resounding success with the formation of a company co-owned by the university and the partnering business. A number of different products are being prototyped and incubated in preparation for commercialization. Besides big business, there is also some collaboration with CBOs which has resulted in developing some products that are produced from waste paper that are already on the market, albeit at a very low scale. Efforts are being made to raise funds for the technical assistance of this business through training the members in relevant chemistry and business management skills.

According to Dr George, the alternative to seeking private sector input has further afforded students with the ostensibly required work experience on most job applications.

“The importance of internships cannot be over-emphasized, especially in the era where work experience seems a major determinant of whether one gets employed or not. Besides, there is always an issue with relevance of the programs offered at the HEIs, in that they do not respond to the skills demand of the labor market. The internship programs can aide in driving two important goals of sustainable development: increasing academic relevance and the establishment of public-private-academia partnerships”, Dr George writes.

Dr Mosotho George is a senior lecturer and head, Department of Chemistry and Chemical Technology at National University of Lesotho.