A trail of destruction 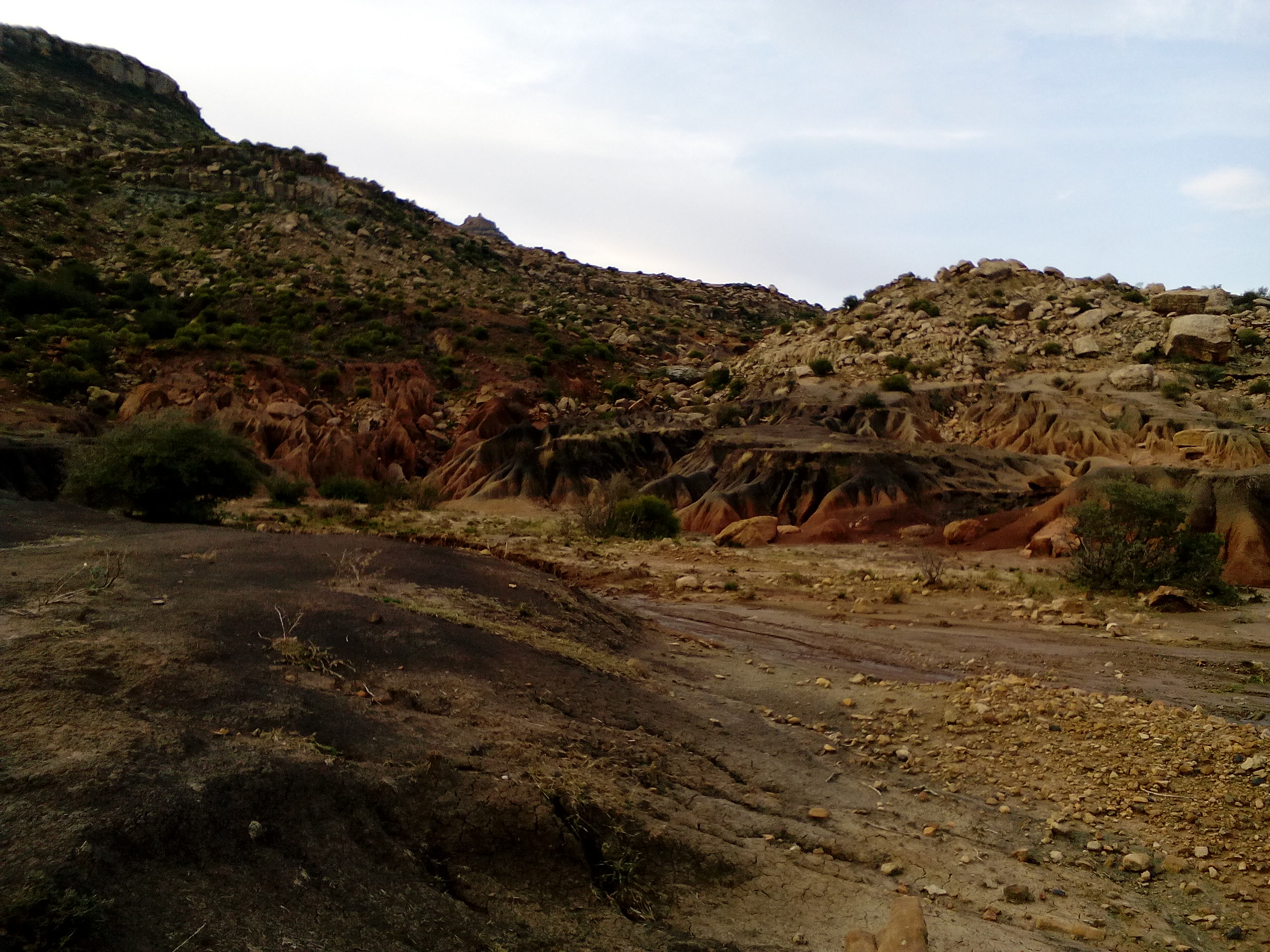 TED was established in 2004 and focuses on sustainable development through appropriate technologies, decentralized wastewater treatment and ecological dry sanitation.

TED Managing Director ‘Mantopi Lebofa believes Lesotho faces “a huge” land-degradation problem because of soil erosion largely resulting from wanton cutting down of trees for firewood, and every individual should acknowledge their role in this challenge if it is to be overcome.

Ms Lebofa, an environmental activist, said admitting one has played a role in the massive land-degradation that has left Lesotho such a broken country would help come up with practical solutions to rehabilitate the countryside before it is too late.

Ms Lebofa, who was speaking to the Lesotho Times after a recent visit to Mohale’s Hoek to evaluate the degradation, urged local residents not to destroy their livelihoods through their own actions.

Mohale’s Hoek is one of the country’s districts slowly turning into a maze of dongas which are eating away arable land and pastures, depriving communities of their priced natural resources.

Local villagers, like any other rural residents in the country, largely depend on agriculture for their livelihood and fear they could soon become beggars if nothing is done to address the scourge of land-degradation.

“Basotho are very good at putting the blame on someone’s doorstep but unless we all acknowledge we are all party to this massive land-degradation because of our actions, it will be very difficult to reverse the problem and ensure we put a stop to this sad story,” Ms Lebofa said.

“As individuals, we need to ask ourselves this question: when was the last time I planted a tree to protect my own environment?”

The majority of Basotho, she points out, have never planted trees or grass yet they continue to harvest these natural resources for household use such as firewood, leaving the land unprotected and vulnerable to soil erosion when it rains or even during heavy winds.

Ms Lebofa also said rural residents were unwittingly causing harm to the environment, adding there was urgent need to educate them about the importance of planting trees every time they cut them down for firewood.

She further highlighted TED’s investigations had revealed almost every week, a tree is cut down or uprooted for firewood or medicinal purposes. But according to Ms Lebofa, the people responsible for this plunder never take any initiatives to plant trees and make amends for their actions.

Ms Lebofa said: “When we were growing up, Lesotho was not as naked as it is today. Even though people solely depended on firewood for cooking purposes, our plants easily grew back as they were not entirely chopped off or uprooted.”

Her NGO urges communities to plant indigenous trees such as leucosidea sericea (cheche) because such plants withstand different weather conditions and do not destroy the environment, Ms Lebofa added.

She further said TED’s community-based public awareness programmes centred on real-life examples to ensure each individual understands he or she has a role to play in saving the environment.

One simple way to help conserve the environment, she added, was leaving cow-dung to dry on the range as it nourishes the soil. This, she said, was one of the easiest and cheapest methods of protecting the environment and fighting land-degradation as fertile soil produces lush grasslands which make soil-erosion virtually impossible.

“In the past, the cow dung was left to dry on the ground before it could be taken for household use but what I saw on my way to Mokhotlong the other day was very disturbing. Immediately after the cow had passed the dung, villages were collecting it as hot as it was for making lisu (dried cow dung used for cooking) and this means the environment is deprived of the nutrients it gets from this manure,” Ms Lebofa said.

She urged every Mosotho using the dung for cooking purposes to at least wait until it has dried out so that both humans, animals and the environment could simultaneously benefit from it.

“They need to understand if the soil isn’t rich, there will be no pasture for their animals and their harvest will go down drastically. And if we don’t do anything about it now, some villagers will end up with dongas right at the entrance of their homes.

“People can only understand sustainable development if they are taught and encouraged to protect the environment they live in, pastures and natural resources like trees and grass. This way, it would be easy for Lesotho to attain the United Nations (UN) SDGs come 2030.”

To achieve the set SDGs, Ms Lebofa stressed the urgent need for Lesotho’s education system to incorporate environmental lessons. This, she added, would ensure Basotho understand the importance of protecting the environment at a younger age.

She further warned against grazing livestock on wetlands as this leaves them dry and unable to water the environment.

“When wetlands are in their best natural condition, they are like sponges and absorb more water, storing it for use during difficult times. When this same water is absorbed and stored by the wetlands, our land remains strong and moist, making it difficult to crack into a donga. But as soon as the wetlands are degraded and unable to store more water, our environment becomes more vulnerable, eventually drying out. The moment this happens, the land starts cracking and in no time, one will see massive land-degradation,” Ms Lebofa said.

She pointed out it was important for ordinary citizens to understand the importance of caring for natural resources like wetlands, pastures and trees because human beings suffer the most when they are negatively affected.

According to the Food and Agricultural Organisation (FAO) Corporate Document Repository on the State of Forests and Plantations in Lesotho produced in 2001, natural vegetation loss is continuing unabated due to firewood collections.

“Although the naturally occurring extent of natural forest and woodland is low, it remains a valuable resource to many rural people, providing fuel, wood for tools and house construction, medicines for both humans and livestock, sites for traditional ceremonies, browse and shelter for livestock. Almost all these areas are extensively used for grazing and firewood-collection. Despite the existence of management schemes backed by regulatory measures, natural vegetation loss continues unabated. The rate of depletion, however, has not been quantified,” reads the report.

“Almost all towns in Lesotho have quite a number of trees in their surroundings. These trees play such an important role in improving the urban environment and the well-being of urban dwellers. Among other things, they ensure a clean water supply for the city, protect the towns against strong winds, provide shade and a cooling effect in hot climate and provide a habitat for urban wildlife. Unfortunately, there are no figures to indicate the extent of trees found in the urban areas.”

A Ha Mohohlo farmer, Tsepo Thibiri, told the Lesotho Times waking up every day to the possibility he could soon stop farming due to land degradation frightened him.

“In rural areas like this one, a family’s wealth is determined by a good harvest and the livestock in their kraal and with this massive soil erosion, every one of us is living in fear,” Mr Thibiri said.

“Almost every family in this village has more than five cattle and we are beginning to miss the pastures that we used to fight over with residents of Ha Moletsane. We wonder if our livestock will survive under this unforgiving soil-erosion given that not all of us can afford to buy fodder from Mohale’s Hoek. We are really scared.”

What also worried him, he said, was there appeared to be no government projects in their area, such as fato-fato, aimed at addressing the situation.

Fato-fato is a community-based government project where unskilled labour sourced from benefiting villages, work for food or money to redress the effects of soil erosion in their respective communities.

“I can say we are unfortunate that unlike other villages, fato-fato projects have not been initiated in this area and we don’t know what to do. We are helpless. I think our animals are at the greatest risk because they will soon start dying because of lack of food,” Mr Thibiri said.

“In the past, when we were fighting over pasture, we would sell maize, sorghum and beans and use that money to buy fodder and other necessities but because we are now losing our farmlands to soil erosion, we don’t harvest much and end up with no surplus to sell.”

Although Thibiri has no idea of what is causing this massive land degradation in the area, other villagers strongly blame a snake called Khanyapa for the massive soil erosion.

According to local folklore, Khanyapa is a snake which lives under water and every time it relocates, it causes a hurricane.

But TED has since dismissed this story, saying Basotho need to acknowledge their responsibility in the destruction of their environment.