A rare success story amid misery 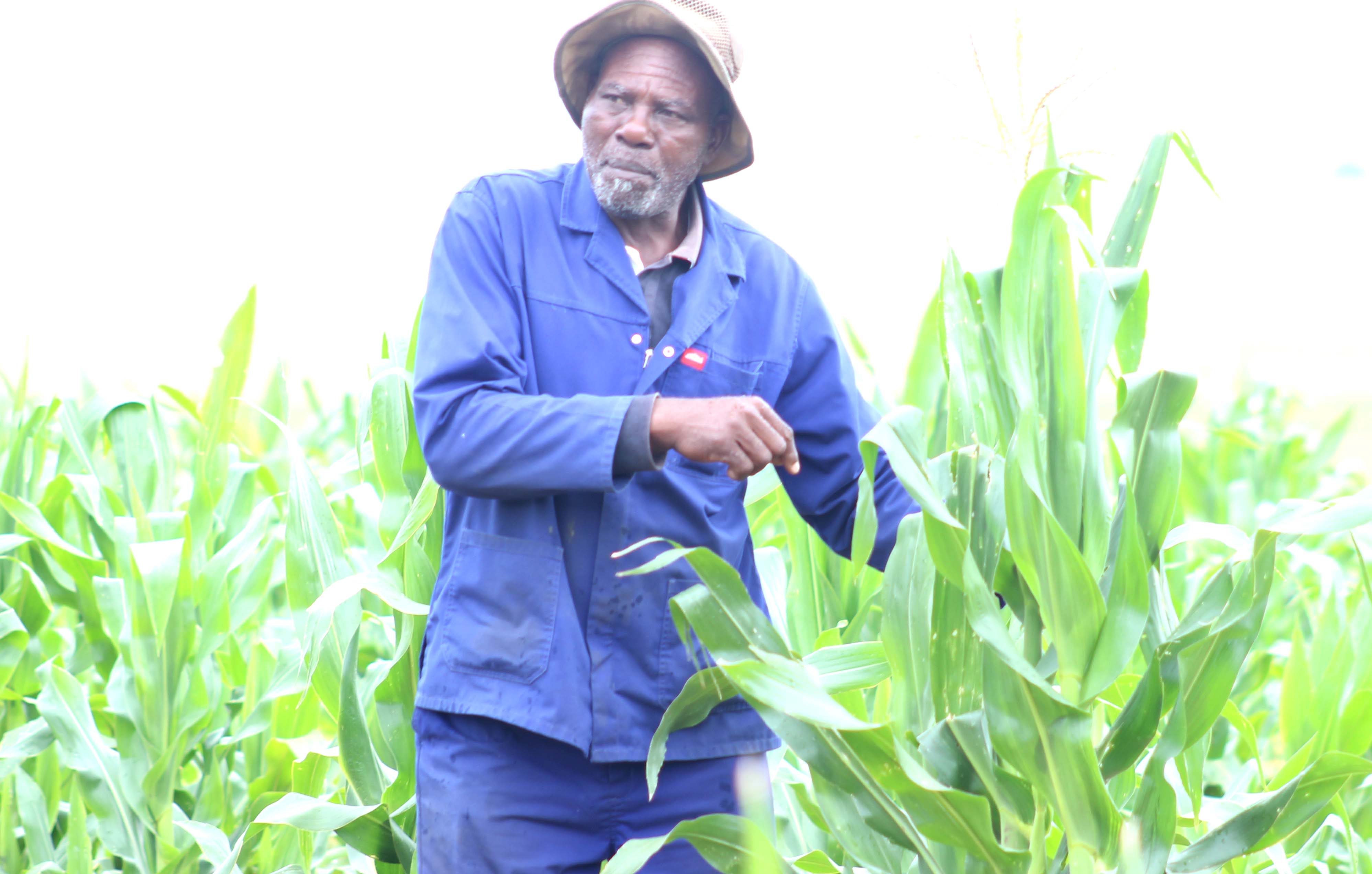 Former agriculture minister Litšoane Litšoane is expecting a good harvest at his Leribe farms despite the drought devastating the country.

LERIBE – He stands tall in the middle of his thriving maize crop, but still Litšoane Litšoane cannot conceal the telltale signs of a worried man.

A Minister of Agriculture and Food Security in the previous coalition government led by Dr Thomas Thabane, Mr Litšoane has since taken to fulltime farming—his first love—he proudly tells the Lesotho Times.

He had been doing extremely well until now, when the El Niño-induced drought wreaked havoc across southern Africa.

Mr Litšoane (64) would harvest at least 70 bags of maize from one hectare but says he expects half this yield this year because of the shifting weather conditions.

The 11-hectare farm he is standing on this Tuesday morning is in Bela-Bela in Leribe and belonged to his now late grandfather. He owns another 100 hectares in the same area and says this has been the toughest year for him as far as agriculture is concerned.

“This farm belonged to my grandfather whom I never met. I only knew my father and grandmother who introduced me to farming,” Mr Litšoane said as he surveyed his crop slightly wilted because of the scorching heat.

“This place is what gave birth to my love for farming; my first love. Farming put food on the table when I was a kid; it paid my fees from primary to tertiary school and does the same to this day.”

His farming methods might now be different from what his parents and grandmother taught him because of a Diploma in Commercial Agriculture he earned from Lascola Emeliana Agricultura in Italy, but Mr Litšoane believes some things simply cannot change, particularly in agriculture.

“My grandmother taught me to put dung in our fields soon after harvest and till the land to make sure the soil retained moisture and was soft for the next planting season.

“She further taught me never to graze animals in the fields because they made the soil harder and lose moisture.

“However, I also later learnt that any good commercial farmer must never feed stalks to his livestock  but instead, plough them back into the ground soon after harvest.

“The reason why this is important is it keeps the soil moist and helps you have a good harvest even in these severe weather conditions.

“The stalks and dung will keep the soil humid and in this severe drought, farmers will only have to dig deeper to ensure that the seeds reach the moist area to give them enough nutrients and moisture to grow.

“This is why I have succeeded despite the current drought. The few people who have heeded my call have also succeeded and will have a relatively good harvest. And the good thing is that this method of agriculture can be practiced by any ordinary farmer.”

Mr Litšoane also said crop rotation was important for farmers as it kept the soil rich.

“It is advisable for a farmer to rotate crops every four years to allow the soil to invigorate itself,” Mr Litšoane said.

“On this piece of land, I farm maize for four consecutive years but in-between, I plant beans during the winter cropping season as this supplies the soil with much-needed nutrients,” Mr Litšoane said.

“Then after every three to four years, I plough crops like peas, wheat and sorghum.”

Mr Litšoane said during a normal summer cropping season, he harvests at least 72 bags (70kilogramme) of maize per hectare.

However, because of the drought, the Bela-Bela Member of Parliament (MP) said he was expecting 30 bags per hectare this time around, and counts himself amongst the luckiest to realise such yield. Most farmers in the district, and indeed in Lesotho, have been hard-hit by the drought and are not expecting much from their fields which makes Mr Litšoane’s farm a rare  oasis in the quicksand of El Niño-induced misery. El Niño is a periodic climatic phenomenon characterised by inadequate rain in some parts of the world and floods in others.  Under El Niño, parts of South America experience heavy rainfall, while dry conditions prevail in Australia, south-east Asia and southern Africa.

In Lesotho, just like the rest of southern Africa, the inadequate rainfall has been devastating on both humans and agriculture.

“I am mostly surrounded by farmers who have not managed to even come close to this and any farmer who will yield around 30-35 bags should be lucky given the current weather conditions,” he said.

He further warned farmers to know when to use short and long-term seed varieties to maximise their harvests.

“Using short-term seeds has its own benefits but has less yields and you have to sow after 20 November,” Mr Litšoane said.

“Long-term seeds are sown between October and November 20 and a farmer can only expect a good harvest at the end.

“I used long-term seeds in all my fields and sowed the seed on 11 November 2015. I am on the right track. I am not scared of anything and come June this year, I will have a good harvest.”

He continued: “Having this kind of crop in the middle of such a crippling drought was not an easy ride.

“It was difficult. It was actually one of the worst summer cropping seasons I have ever witnessed. But like an experienced commercial farmer, my skills of keeping the soil moist came to my rescue; they made my life easier.

“But I will not stand here and claim that I wasn’t affected by this drought, because I was. There are many challenges farmers face when there is a drought, and one of them is disease to both crops and livestock, and I also have livestock.

“During a normal summer cropping season, we spray chemicals when we are planting the seed. But the chemicals can only be applied during rainy days.

“But this time, we didn’t have the opportunity to prevent disease because like I said, chemicals can only be administered during rainy days for them to penetrate the soil, and we have not had many of these wet days this season.”

But Mr Litšoane said farmers should not despair and urged MPs to play their part in helping communities.

“As a Member of Parliament, I feel we need a tighter law preventing animals from grazing on farms to ensure that we beat the effects of climate change and continue to produce good harvests. Climate change is here to stay and we need to make tough decisions for the sake of our people,” he noted.

“But like I said, we need MPs to take the lead in coming up with such laws, and also have government’s support.

“I can tell you that within five years of this legislation being in place, we would be able to have a good harvest as a whole country, not a few individuals. It is a known fact that Leribe is Lesotho’s leading farming district, but because of the current drought, it is not going to produce a good harvest. That’s why we need to do something about it.”

He also advised that while parliament is drafting the law, individual farmers could learn from seasoned farmers.

“I foresee Lesotho in more trouble in the near future especially in terms of food security. I don’t think we will be able to recover from this current drought for the next five years if something drastic is not done.”

Mr Litšoane urged ministries of Agriculture and Food Security, and Energy and Meteorology to work together and train Basotho about modern farming methods, as another way to mitigate climate change and boost harvests inspite of adverse weather.

“We need to seriously think of introducing conservation farming to our people and ensure that all systems are in place before it is kick-started,” Mr Litšoane said.

“It will not be easy for farmers for the first year but believe me, the following year, we will have a good harvest.”

Conservation Agriculture (CA) is a set of soil management practices that minimize the disruption of the soil’s structure, composition and natural biodiversity. CA has proved to have the potential to improve crop yields, while improving the long-term environmental and financial sustainability of farming.

Looking deep in thought, Mr Litšoane said funds permitting, he was hoping to have an irrigating system on his farm.

This commercial farming method would not only boost production but also create jobs for the people of Leribe.

“I don’t want to make plans that will remain white elephants. My wife and I are getting old and we need the buy-in of our children in order for the plans to come true and be sustainable.

“I was talking to my daughter, who is also into agriculture, to venture into greenhouse farming and employ people who will take care of these farms,” he said.

Asked if it was advisable for farmers to start planting crops now because of the rain which started falling consistently last week, Mr Litšoane said doing so would be a disaster.

“I know it’s tempting to start planting now because of the current rains but it will only be a waste of money, seed and energy because it is too late,” Mr Litšoane said.

Who should elect prime minister: citizens or MPs?