A place to call home at last 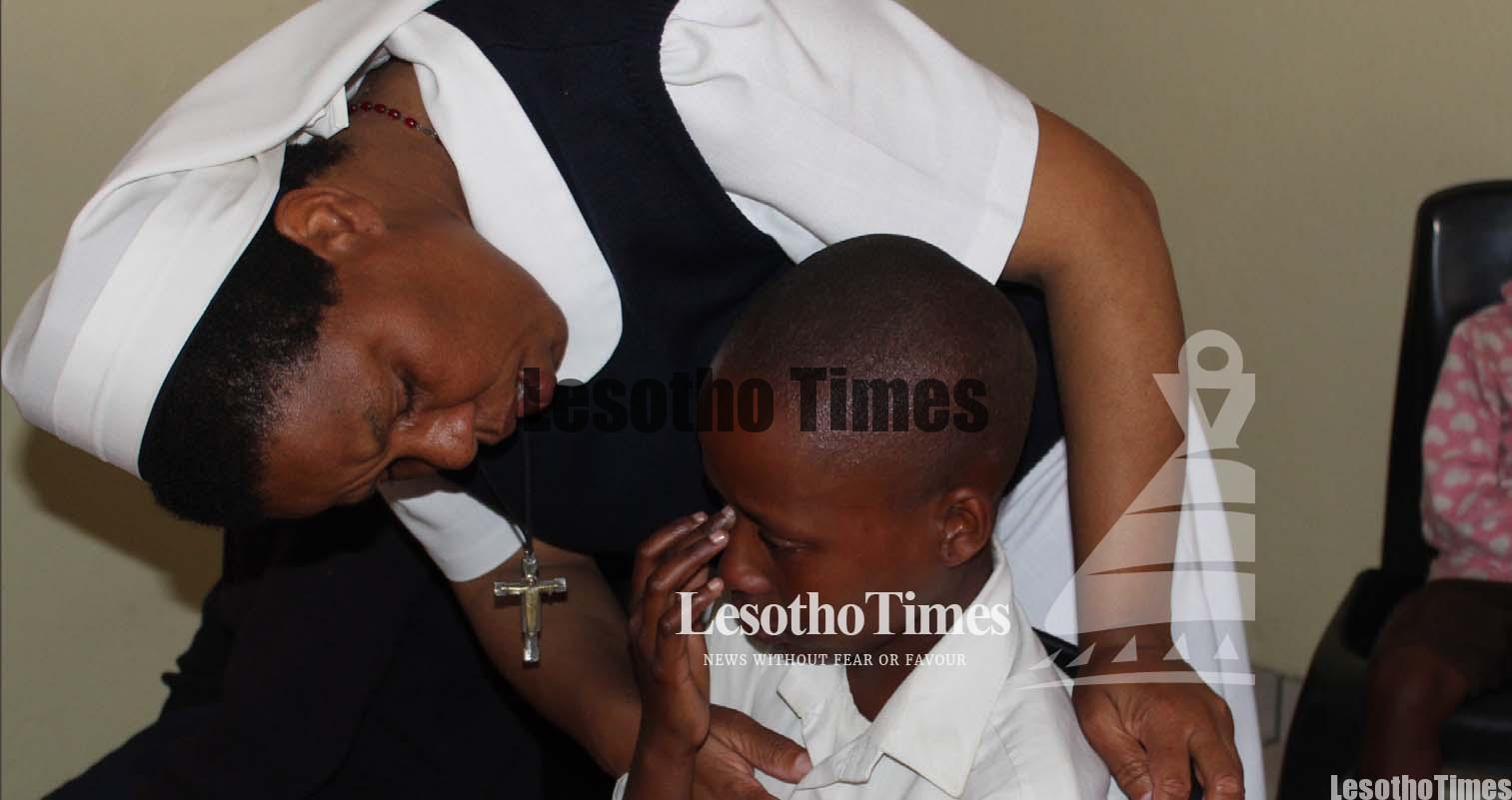 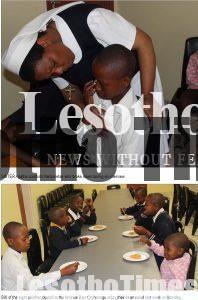 . . . Some of the girls need sanitary ware, which the home is struggling to provide

MOTSEKUOA — At last, 13-year-old Moliehi can now go to school content she would not have to sacrifice some valuable learning time to slave for her own upkeep, thanks to officials at her new home — the Andrew Blair Orphanage in Motsekuoa.
Moliehi and seven other orphaned children aged between six and 13 years were living at an orphanage recently shut down by government Maseru for failing to meet the required, living standards.

Officials from the Ministry of Social Development subsequently brought the children to Andrew Blair Orphanage last month and the eight are now part of the 52 needy juveniles living at the Roman Catholic Church-run facility.

However, it is not just the patches on their heads that is a visible reminder of some of the diseases and hardships the children endured at their previous home, but also their excitement and disbelief each time they are called for a meal.

The children say they had become used to being fed once a day and as a result, having three full meals on a single day the way they do now at their new home, is like heaven to them.

The children also claim they did not have enough blankets at their former home, adding some of those donated to the orphanage were being sold by the owner.

They also claim to have suffered various forms of abuse ranging from assault, forcedlabour and insults, which they say robbed
them of their confidence and trust in adults — and the fact that the world could be a better place.

Yet Moliehi’s story is much deeper than the ringworm-patches visible on her head — the ringworms, she repeated matter-of-factly, which had become part of her life. “After some time without treatment, surprisingly they stopped itching. What’s left
are just scars,” she said in an interview on Monday last week.

And the same, it appears, could be said about her life — that the past is now history and only scars remain to remind her of that sad chapter in her life.

Notwithstanding the daily grind that was her life, Moliehi’s biggest heartache was, however, not being able to attend school regularly. Because of lack of funds at the previous home, Moliehi had to miss out on some classes as she worked on the streets of Maseru selling various wares.

Now that she is at a proper home, Moliehi is confident her street-vending days are finally over, and has now resumed classes at Motsekuoa Primary School, which is just a stone’s throw away from the Andrew Blair Orphanage. And despite her age, Moliehi is in Class Three not Class Seven or Form A as is expected of a 13-year-old — another painful  reminder of how her difficult circumstances deprived her of her basic right.

“I am supposed to be in Class Seven but because I kept dropping out of school to work for the owner of the orphanage, the school here advised I start from Class Three.”

Living under the care of an aunt after the death of her parents seven years ago, Moliehi says she had to drop out of school when she was in Class Two to care for her aunt’s family. “My former teacher, who had felt sorry for me and knew I was a promising student, then took me to an orphanage in Maseru where I had hoped all my troubles were over.
“Little did I know that they had just begun because I was simply taken to another level of slavery,” she said.
Moliehi says she was made to sell the clothes, soap and food donated to the children by well-wishers. “I found myself street-vending around Maseru East. What used to happen was that each time clothes were donated, the family that operated the home would select some and give the rest to me and the others, to sell.

“We also sold 12.5kg bags of maize-meal, canned beans and cooking oil, which was the food that we were supposed to eat at the orphanage. Instead, we only had one meal per day because the owner would always complain there was no food, yet he would be pocketing the money we were getting from selling food on the streets.”

Moliehi then broke down as she explained the many times she was sick and had to walk all the way alone to a clinic in Motimposo. “One day, I had terrible stomach aches. I had no idea I had started menstruating and when I saw blood stains, I panicked thinking it was some form of a sickness. No one had taught me about reproductive health. “I then confided in a friend who explained there was nothing wrong with me because what I was experiencing was a sign of womanhood.
It frightened and worried me at the same time because she told me this was the beginning of yet another struggle since the
home never provided sanitary ware.” Her friend advised her to — just as she did — improvise with pieces of cloth and fashion
some sanitary pads.

“At least, now I don’t have to worry about such issues. This home has been a fountain of hope because the sisters here provide sanitary ware. I have never been this comfortable and would like to work hard in school to become a nurse.”

Another youngster, Reitumetse, also aged13, is a child in pain and finds it hard to trust anybody. She tearfully narrated how
she tried to make sense of her life but failed, while she was living at the now-closed orphanage.

She claims some family members of the owner of the now-defunct orphanage thought she was stubborn and would beat her regularly. “They also called me names, humiliated me countless times in front of other children and I would wonder what I was living for.

At times, one of the homeowner’s sons would come late and drunk and wake us up with beatings to give him some food. It was
difficult to separate the orphanage from the  home-owner’s family and activities,” she said, before breaking into tears.
Reitumetse said she was staying with her grandmother following the death of her parents. She had briefly attended Maseru Primary School before her grandmother, who was struggling to look after her, took her to stay at the orphanage.
“I started school at Mpho Community but this was not meant in any way to ensure I attended all classes because I also had the
responsibility to sell goods donated to the orphanage,” she said.

Now in Class Three, Reitumetse said she could hardly believe that all her suffering is now a thing of the past.
On the other hand, the youngest of the children, Poloko, aged six, said although she misses her elder sibling, she is happy staying with the Catholic sisters at her new home.

She had been staying with her sister at the previous orphanage who, however, ran away when some Social Welfare officials came to take them. “I like the sisters here a lot because they are taking good care of me and feeding me,” she said.

Another child 13-year-old Lehlohonolo, who is in Class Four, said all he wants is to complete his education and become a pilot. A bright-eyed boy who during the interview always interjected to help the other children explain their problems at the other home, Lehlohonolo should have been his parents’ pride if they had lived long enough to see him shine.

But today the brave boy who is fluent in English said he would not have minded the ill-treatment at his previous home, if only he was allowed to go to school. “You see, there were times when I became curious to know what could be worse between
life at the orphanage and in prison. I actually did find out that prison was better because the inmates eat three meals a day.
“It was hard to be both a child and an adult at the same time. “We had to work without pay and were conditioned not to complain. “The worst thing was exposing us to smoking and drinking when we were sent to buy cigarettes and alcohol at bars and shebeens.

Some children ended up drinking beer and smoking,” he said. Some of children, he said, even went out at night with no questions asked when they returned in the morning. Lehlohonolo said he liked the space at his  new home and enjoys playing football with the other boys. “Here, we are not isolated from the other children because at school, we meet and play
with those living with their families. I like that because it does not make me feel any different from the other children. Being reminded that I am an orphan every time is the worst thing that can happen to any child.”

Head of the Andrew Blair Orphanage, Sister Agatha Tsaeng for her part said she was “very disturbed” when the eight children
were brought to her orphanage for the first time. “I quickly realised that the children were miserable; they had no clothes and some were quite skinny,” she said.  According to Sister Tsaeng, the children need psychological support to make them believe in their new home, to trust again, become easy to manage and mix well with other children.

“Some of the children have already started undergoing counselling sessions to help them move on and know that they are now under a new care facility, which is also safe.”

The Andrew Blair Orphanage, which was  opened in January this year, starting with 30 children aged between six and 19, looks after children that are orphaned, abandoned and neglected.  Some are living with HIV.

Sister Tsaeng said they had not expected the demand for their services to be high and, funds permitting, there was need to extend the facility. “Construction of the facility was motivated by many sick, orphaned children who used to come to our nearby clinic for treatment. Our enquiries into the lives of some of these children informed us that they were not well
taken care of. “We have since realised that this is not a problem in Motsekuoa alone but there are many children countrywide in need of proper care facilities.”

Siverts resignation ‘cause for relief’