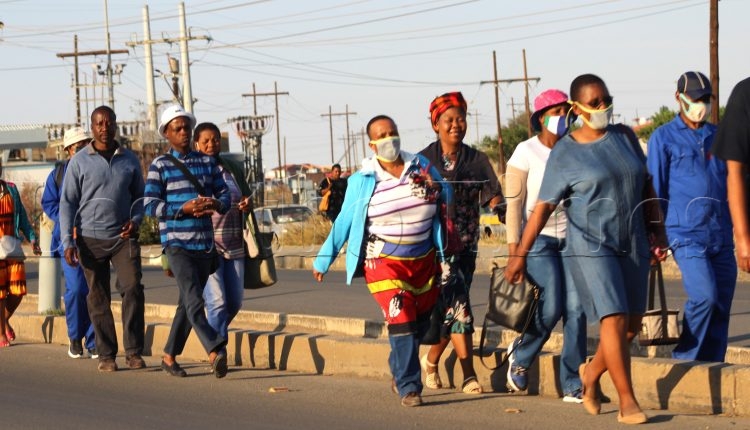 With only about a week left, the United States government says it is “disheartened” by Lesotho’s failure to address its human trafficking concerns.

This puts the country on the brink, with the real risk of losing billions of maloti in funding under the second compact and about 45 000 textiles jobs facing serious jeopardy.

The US had given Prime Minister Moeketsi Majoro’s government a 1 February 2021 deadline to address an array of human trafficking concerns failing which Lesotho would lose out on a number of American aid and trade instruments meant to help poor African countries.

With just about a week to that deadline, the US government says it is disappointed at the lack of progress.  It now seems likely that Lesotho will not be able to address some of the concerns, which includes demands to prosecute senior officials implicated in human trafficking, in such a short period of time.

That will cause the country to lose out on the multi-billion maloti second compact under the Millennium Challenge Corporation (MCC) as well as eligibility for the African Growth and Opportunity Act (AGOA) on which the entire local textiles sector is anchored. The AGOA law allows Lesotho to export textile products to the US duty-free, making them highly competitive.   It was because of AGOA that mostly Taiwanese and Chinese entrepreneurs descended on Lesotho in the 2000s to establish large apparel factories that now employ about 45 000 Basotho. But the likelihood of this largest private sector employer being shaken to its foundations is increasingly appearing real.

The US discontent was expressed by its Ambassador to Lesotho, Rebecca Gonzales, in an exclusive interview with the Lesotho Times yesterday. Ms Gonzales said she was “disheartened that Lesotho’s journey to the second MCC compact has been derailed by such significant challenges that could have been addressed years ago”.

She said Lesotho also risked losing out on health funding under the US President’s Emergency Plan for AIDS Relief (PEPFAR) which has helped the country make great strides towards containing the deadly HIV/AIDS pandemic.

In addition, the country will also lose out vital security sector assistance programmes such as police and military trainings and exchanges which are crucial to Lesotho’s plans of implementing security sector reforms in line with the 2016 recommendations of the Southern African Development Community (SADC).

AGOA gives duty-free and quota-free access to the US market to eligible sub-Saharan African countries including Lesotho. The legislation, which was approved by the US Congress in May 2000, is meant to incentivise African countries to open their economies and build free markets.

It was renewed for another 10 years in June 2015 as the AGOA Extension & Enhancement Act and amended to allow the US to withdraw, suspend or limit benefits if designated AGOA countries no longer complied with its eligibility criteria.

The law mandates the American president to designate countries eligible to benefit from the trade facility on an annual basis after undergoing a review process. Among the main eligibility criteria for the facility are a market-based economy, adherence to the rule of law, the implementation of mechanisms to combat corruption and upholding of human rights.

The MCC was established by the US Congress in 2004 as a foreign aid agency to help lead the fight against global poverty by working with selected partner countries to identify requisite areas in need of funding support.

Before qualifying for compact funding, countries have to meet criteria similar to that of AGOA.

Compacts are large, five-year grants for countries that pass the eligibility criteria. Lesotho received its first five-year MCC compact worth US$362, 5 million (more than M3 billion) in July 2007.

Among other key projects, the US$362, 5 million funded the construction of the Metolong Dam as well as the President’s Emergency Plan for AIDS Relief (PEPFAR) to mitigate the negative economic impact of poor maternal health, HIV/AIDS, tuberculosis and other diseases.

In 2015, the MCC stalled in renewing the compact programme over rampant human rights abuses under then Prime Minister Pakalitha Mosisili’s government.

The renewal and eligibility for the second compact was subsequently reconsidered and confirmed by the MCC Board in December 2017 after the ouster of the Mosisili coalition in the June 2017 elections and the advent of former Prime Minister Thomas Thabane’s second coalition government. The Thabane coalition initially promised to address grave human rights concerns of its predecessor before embarking on serious violations of its own.

The Thabane administration lasted until May 2020 when it was replaced by the current Moeketsi Majoro-led coalition. The Thabane coalition was accused of failing to tackle police brutality against citizens and overseeing rampant corruption, among other vices.

The Thabane government also dragged its feet on the multi-sector reforms process. It even missed the May 2019 deadline set by SADC for the full implementation of the constitutional and security sector reforms. All of these issues were part of the eligibility criteria for the second MCC compact.

In addition, the Thabane government was accused of paying lip service to repeated warnings to address human trafficking concerns.

The US government defines human trafficking as “modern day slavery” which involves the movement of persons locally and beyond a country’s borders against their will to get them into forced labour, involuntary servitude and debt bondage.

Back in September 2020, Ms Gonzales revealed that due to its failure to deal with human trafficking, Lesotho had been placed in Tier 3—the lowest tier in the US State Department’s Trafficking in Persons (TIP) Report for 2020.

She warned at the time that Lesotho risked losing out on reselection to continue developing a second MCC compact if the scourge of human trafficking and other human rights concerns were not addressed by 1 February 2021.

As if the potential loss of the MCC compact is not disastrous enough, Ms Gonzales yesterday warned that even AGOA benefits and other forms of development assistance will be lost if the Majoro administration would not have taken decisive steps to address human trafficking concerns by 1 February 2021.

“US taxpayers are unwilling to support governments that do not act against human trafficking.  That is why the US Congress passed laws restricting US development assistance to countries on Tier 3.

“Last year, I secured a one-time waiver for Lesotho from the president of the United States.  I wanted to avoid any reduction to US assistance so that the Right Honorable Prime Minister Dr Moeketsi Majoro and his administration would have time to show progress in combating human trafficking and address other critical issues.

“It is worth emphasising that the waiver Lesotho received is not permanent. The government must take action by 1 February 2021.  If not, the restrictions on US foreign assistance will come into force.

“I have spoken at length with the leadership of the MCC.  They are adamant that a second compact will not be signed until the government of Lesotho gets off Tier 3. MCC has some amazing proposals for a second investment in Lesotho—they are eager to make progress on a second compact.  But it is absolutely not going to happen in 2021 unless the government gets off Tier 3 and pursues the credible investigation of officials who are believed to be complicit in human trafficking over the past several years,” Ms Gonzales said.

Asked if the US government felt the Majoro administration had not achieved anything tangible towards addressing the human trafficking concerns, Ms Gonzales said they were encouraged by the premier’s end of year message last month wherein he pointed to some government actions which included passing an anti-trafficking bill as well as creating an Anti-trafficking and Migrant’s Control Division in the police force.

She, however, said these measures were not enough and “the United States is still looking to see sustained action to enforce legislation and bolster efforts to implement new initiatives to address the issues of human trafficking in Lesotho”.

She said her government was aware of widespread allegations against some members of the current government. However, while some of the allegations could be true and others false, it was still incumbent on the government to ensure thorough investigations were conducted, the ambassador said.

Although Ms Gonzales did not mention any names, this could have been in reference to recent allegations by a Home Affairs official that Deputy Prime Minister Mathibeli Mokhothu and senior members of his Democratic Congress (DC) party were involved in human trafficking activities alongside a Pakistani national, Rana Qamar.

The allegations were made by an immigration officer, Mapeete Jonathan, in her court application challenging her transfer from Moshoeshoe I Airport to the head office of the immigration department in Maseru.

In her court papers filed last November, Ms Jonathan alleges that she is being transferred as punishment for refusing to allow Mr Qamar to “traffick” two Pakistanis into the country through the airport earlier this year.

She further alleges that she was reliably informed by a fellow immigration officer that Mr Qamar, who is married to a Mosotho woman, is close to Mr Mokhothu and other senior DC officials. Mr Qamar is alleged to have given the DC six campaign vehicles during the last elections in 2017.

Mr Mokhothu vehemently denies the allegations. Ms Jonathan insists the “donation” had given Mr Qamar leverage over the DC leadership to enable the Pakistani to demand her transfer after she refused his two fellow Pakistani travellers entry into the country in March 2020. The allegations resulted in a public war of words between the DC and its coalition partner- Dr Majoro’s ABC. The two parties have since agreed to refrain from publicly accusing each other and instead work together for the stability of the government.

Ms Gonzales also said trafficking allegations against officials were not only a recent issue, suggesting there are old cases that have been neglected.  She emphasized the need for through probes ensuring that “officials found complicit in any form of human trafficking must be held accountable”.

Outlining what the government ought to have achieved by the 1 February 2021 deadline, she said, “beyond the new legislation, Lesotho’s law enforcement agencies must continue their investigations into credible allegations of official complicity in human smuggling and human trafficking”.

“Let me emphasise the importance of the word ‘credible’.  In the last few weeks, there have been many public accusations and counter accusations of involvement in trafficking.  Some are likely true; others may be false.  I urge the innocent to cooperate fully with law enforcement so that they can be exonerated.  And I urge Lesotho’s law enforcement to spare no effort to identify the guilty so that they can be punished to the full extent of the law.  Official complicity in human trafficking is the worst form of corruption — using one’s high office to profit from buying and selling humans is outright appalling.

“There is time for Lesotho to meet the February 1 deadline.  If the government takes all these actions, up to and including making substantive progress in its investigations of credible allegations of official complicity in human trafficking then perhaps the country may see an upgrade from Tier 3,” Ms Gonzales said.

But for any arrests and prosecutions to be made within that short period, considering the long delays characteristic of Lesotho’s criminal justice system, appears practically impossible, leaving the country on the brink.

The US is Lesotho’s largest bilateral donor. Any loss of American aid will have far-reaching consequences on local development programmes.