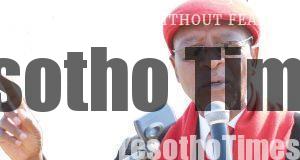 MASERU — Main opposition Democratic Congress (DC) secretary-general Ralechate ‘Mokose says the call made to local government proportional representation councillors to return to the Lesotho Congress for Democracy (LCD) or risk being disqualified is but “a lame gimmick to scare them”.

‘Mokose told the Lesotho Times on Tuesday that that the PR list submitted to the IEC remains closed until such a time that “the next election is called”.

“No political party can undo the PR list. This is just gimmick by the LCD to scare people into recoiling. They want to disconcert people and capitalise on their fears,” ‘Mokose said.

“I am yet to see where they will end up. I hear that they (LCD) plan to take the matter to court. Maybe it’s just as well so the courts can interpret the law.”

Meanwhile, while addressing his Sunday rally in the Malimong constituency on Sunday, DC leader Pakalitha Mosisili told councillors who received letters from Rants’o “to tell her go hang”.

“You must look her in the face and tell her to go hang.  She should stop being so much in your faces,” Mosisili said.

“A party secretary-general has no business writing to councillors who have been democratically elected and legally installed into office. You had better tell her to get off your backs.”