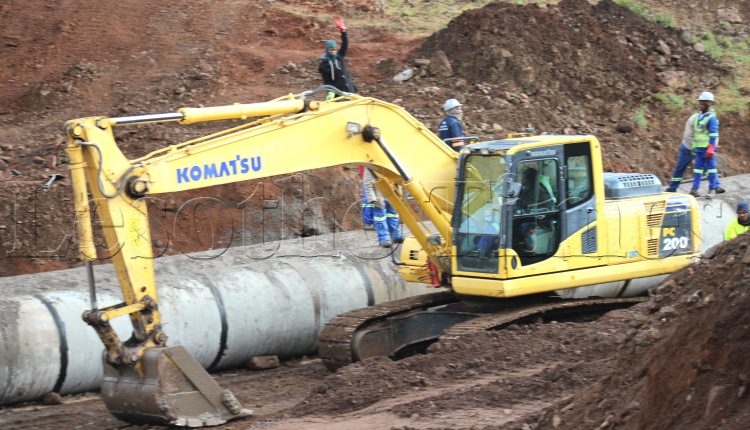 ABOUT 150 workers retrenched from the Polihali diversion tunnel project in March have accused their employer of using the Covid-19 pandemic as a “convenient excuse” to purge them.

The workers were employed by SCLC joint venture, which was awarded a sizeable M517 million contract by the Lesotho Highlands Development Authority (LHDA) to construct the Polihali diversion tunnels.

The company retrenched all its 349 workers at the end of March 2020 at the onset of the lockdown to fight Covid-1.  It rehired them, except the 150, when it resumed operations in June 2020 after the lifting of the national lockdown.

The 150 workers, who were not rehired, are now crying foul.  They accuse their employer of using Covid-19 to punish them for complaining about salary cuts and other working conditions of service.  The workers said they were last year paid M3 456 monthly.

However, the employer then scrapped their payments for overtime. They ended up getting M2 300 monthly. Though this was done last year, before the onset of Covid-19, the workers say this had been a very sore point for them.

A worker who spoke to the Lesotho Times this week said when they complained about the salary cuts then, they had been threatened with dismissal.  The worker claimed all the 150 workers, who were not rehired in June this year when the company re-opened, had been among those who were most vocal about the salary cuts.

Construction, Mining, Quarrying and Allied Workers’ Union (CMQ), which is representing the workers, yesterday said the majority of the affected workers were its members.

Robert Mohloki, who was the CMQ’s shop steward at the construction site, is among those who have not been re-hired.

“A large part of the workers who have not been rehired are our members… So, we have reason to believe that this is a systematic purging of CMQ members from the company,” Mr Mohloki said.

He accused the company of generally frowning upon trade unions at the work place.  At one point, he claimed the company had asked all employees if they were members of any labour union. This was meant to victimise those who subscribed to trade unions.

He said the company also barred labour union representatives from accessing its premises to address its members.

Mr Mohloki said they had been shocked to see the company hiring wholly new workers when it had promised to give them back their jobs when it initially retrenched them in March 2020.

A copy of the retrenchment letter reads:

“On 25 March 2020 the government announced a national lockdown with effect from midnight 29 March 2020 to 21 April 2020. During the lockdown period, only essential activities can continue as normal.

“Since the construction industry is not considered by the government an essential activity, SCLC Polihali Diversion Tunnel Joint venture is unfortunately obliged to close the site and retrench your employment contract.

“The last working day will be on Saturday 28 March 2020, on that day you will be required to vacate your accommodation at SCLC camp.

“Please consider this letter as official retrenchment notice. March 2020 salary will be paid on 27 March 2020, while the notice period and other compensations foreseen in the contract will be paid at the end of April 2020.

“When the lockdown period comes to an end and the joint venture is in a position to restart work at Polihali Diversion Tunnel project, it will reconsider rehiring you for the same project.”

But Mr Mohloki claimed this had not happened. Instead of re-hiring the retrenched 150, the company was even hiring new workers.

CMQ secretary general, Robert Mokhahlane, also said the 150 workers had not been rehired despite the company resuming operations. It was hiring other outsiders.

LHDA chief executive officer Tente Tente yesterday said the services of the employees who were not rehired were no longer required by the contractor.

“It is important to note that in March 2020, the nature of the work for the diversion tunnel contractor changed from site establishment and surface works (which requires more workers) to tunneling, (which has limited space and requires fewer people) which is driven by machinery.

“Some of the workers retrenched just before the Covid-19 shutdown were re-employed. However, some were not as their services were no longer required given that the project has progressed and the labour requirements have since changed. The LHDA understands that this may be disappointing for the concerned workers and reaffirms that, as the implementer of the LHWP, it is committed to ensuring that all contractors and consultants appointed to the LHWP comply with the labour laws of the country,” Mr Tente said.

He said while contractors are responsible for their workforce, they were bound by “Lesotho’s labour legislation, by the terms of their construction contracts and by the LHWP Labour Recruitment Guidelines”.

“The LHDA is carefully monitoring the labour recruitment practices of the contractors on the project to ensure that they adhere to the project’s Labour Recruitment Guidelines and to the country’s labour legislation,” Mr Tente said.