Futility of a Mokhothuless GNU

I am informed by my Editor that Ntate Mothetjoa Metsing has taken serious umbrage with my comments about him last week.

For those among us who have just returned from the mountains, or from cloud cuckoo land, I commented extensively in my column last week about Ntate Metsing’s chameleonic characteristics and how he seamlessly charms his way through the political minefield called Lesotho. 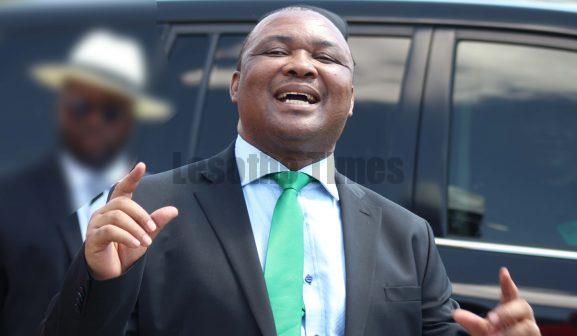 My observations last week followed reports that Ntate Metsing was now charming his way back into Ntate Thabane’s bed. He had already successfully done so it appears. What now awaited him is a plump Cabinet seat.

Considering the hectic fallout between the two in the period 2014/15, I said I had never imagined the two seeking any renewed romance. But with Ntate Metsing, anything is possible, I opined last week. Even if one believes in the old adage that there are no permanent friends or enemies in politics but permanent interests only, Ntate Metsing stills scales higher.

I am revisiting this topic again this week.  It is clear from Ntate Metsing’s protests that he regards my views as mere gratuitous condemnation of him as an unreconstructed opportunist when all he is trying to do is rebuild the country.

I beg to differ though. I wasn’t necessarily attacking Mr Metsing for his ideas. After all, everyone is entitled to their opinion. In fact Ntate Metsing’s idea of a government of national unity (GNU) and even a truth and reconciliation commission (TRC) is excellent. I like it.

Mr Metsing is right to protest that there were unity governments at one stage or another in Zimbabwe and Kenya which brought harmony to those countries and he wants the same for Lesotho. I have no problems with that view.

What I have a serious problem with is how Ntate Metsing is going about seeking to achieve the GNU. Ntate Metsing is wrong to believe that he can stampede all and sundry into a GNU. A GNU can only work if it’s a result of broad negotiations and consensus among all key political players in a country. In some cases it might even need all the lesser mortals. In Lesotho’s case, Bokang Ramatšella might need a seat on the table (I am not completely sure about that though). A GNU must have key discernible purposes and aims. In almost all the cases I know of successful GNUs, a neutral foreign interlocutor has been involved to mediate among the parties.  The South African experience under Nelson Mandela was a grand miracle exception. It did not involve a neutral foreign mediator.  The South Africans hammered their GNU on their own. Maybe that’s why it did not last.  In Kenya in 2008, it was Kofi Annan (may his soul rest in peace) who mediated among the protagonists; Mwai Kibaki and Raila Odinga. In Zimbabwe, it was one Thabo Mbeki.

For Ntate Metsing to believe he can just go to State House and cobble a GNU with Ntate Motsoahae over a breakfast of oats and ’Maesaiah’s  baked cookies with a tinge of indigenous ginger juice is at best illusory and at worst hallucinatory.

The 2009 to 2013 GNU in Zimbabwe was a result of broad negotiations and consensus between all factions of the Movement for Democratic Change (MDC), which coalesced under the leadership of one Morgan Tsvangirai (may his soul rest in eternal peace) and one Robert Gabriel Mugabe (may his soul burn in eternal hell). So was the Kenyan experience with Kofi Annan, a Ghanaian, interceding between Kibaki and Odinga.

So if I may ask you Ntate Metsing, who is the neutral interlocutor between you and Ntate Motsoahae? But more importantly, why does a GNU only become relevant when you are out of power Ntate Metsing. If memory serves me well, you were Ntate Mosisili’s deputy until only recently in 2017. Why was a GNU irrelevant then? Why did you not agitate for it when you had all the power and means to constitute one? You may have been deputy PM then, but you were a very powerful DPM? You even had the army under your wings? Why did you not give us a GNU then? Why has it become so important now?

Let me nevertheless still give you the benefit of doubt, and agree that you are genuine and honest in your quest for a GNU. Let me also agree with you on the efficacy and general need for a GNU, particularly in light of the country’s current dire circumstances. But who should then lead the process of agitating or negotiating for a GNU? With due respect, I don’t think it should be you Ntate Metsing but Ntate Mathibeli Mokhothu, the leader of the DC, and the official leader of all the opposition in parliament. A GNU without Ntate Mokhothu, in other words a Mokhothu-less GNU, is like a tree without roots. It does not have a scintilla of reality. It does not have a leg to stand on. It simply cannot exist. Yes you can be present for the State House cookies. But Ntate Mokhothu’s presence is also a must if a GNU is to become reality. So is Ntate Selibe Mochoboroane’s presence. So should be Ntate Nqosa Mahao’s. As I have said, a GNU is a product of broad consensus. What you are currently doing Ntate Metsing falls far short of seeking to achieve consensus. Maybe you are just in exploratory talks with Ntate Motsoahae for a GNU. The problem with those exploratory talks is that they lack the buy in of all other opposition leaders. You are in essence a lone ranger. A directionless missile.

Which perhaps explains why Ntate Mokhothu has dared Ntate Thabane to continue his talks with “useless parties”. Even if I disagree with the notion of “useless”, the fact is that Ntate Mokhothu’s heart is not for a GNU. So is Ntate Mochoboroane. So is Ntate Mahao and his sidekick, Ntate Rapapa, who is most likely thinking about his turn to warm the State House couches, albeit temporarily, if the no confidence bid succeeds next week.

Again I repeat, you cannot even begin any serious discussions of a GNU without Ntate Mokhothu. The sooner this simple fact dawns on you the better Ntate Metsing. If I were you, I would humble myself before Ntate Mokhothu. I would stop trashing Ntate Mokhothu as a “child”. I would give him his place and respect him as the leader of the opposition. Perhaps you would then obtain his buy-in for the GNU, and persuade him that Maesaiah’s cookies are worth a try after all.

But   there is now one giant reason why a GNU for Lesotho is now completely dead in the water and a cause not even worth pursuing.  At your rally in Butha Buthe this week, you made it very loud and clear Ntate Metsing that you will only agree to be part of a GNU on one condition; that you become its leader. In essence you become Prime Minister.

Lets consider this quote from you; “I do not want to be part of the GNU unless they (current coalition partners) talk among themselves and agree to appoint me as prime minister.

“Only then (as prime minister) can I be a part of the GNU. I just can’t be a minister again. I have served in that position and I can’t put up with being told that I’m underperforming.”

Really Ntate Metsing? The problem of course is that you are not aware of your humorous side. You seem to have fallen in love with your fantasies. You have been repeating your calls for this GNU. I have lost count. You now actually believe your fantasies.

So a man with a sole constituency seat from far flung Mahobong suddenly becomes Prime Minister in a GNU. And Bontate Thabane, Moleleki, Maseribane and Mme Keke Rantšo actually convene to anoint you? What becomes of Ntate Thabane then? Maybe you appoint him Minister of Gender, with Ntate Moleleki as Minister of Sports. Ntate Metsing, if becoming PM is your condition for a GNU, why are you therefore wasting our time on a project that does not have a chance in hell of ever seeing light of day. Surely, don’t you have better things to do?

There is even a better chance of Jesus Christ appearing at Setsoto Stadium next Sunday than you becoming a GNU PM. So why the hell are you traversing the length and breadth of the country every week calling for a GNU that has no chance of seeing light of day because of your hallucinatory pre-conditions? Dreaming is not necessarily bad Ntate Metsing. It’s not prohibited in the constitution. So dream on.

I have to give it to Ntate Motsoahae though. He is a brilliant politician. Instead of opting to trash your proposal as what any sitting PM should do, Ntate Motsoahae has opted to string you along.

Consider this brilliant response from him: ““I have heard his thoughts on things but I don’t make decisions by myself. My party will look at his statement and then we will take it on from there….”

Ntate Motsoahae will likely string you along. Make you believe you will become PM. Get your votes to ward off the no confidence motion, then spit you afterwards.

If I were you, Ntate Metsing, I would stop living in fantasyland and join Bontate Mokhothu and Mahao on the campaign trail. It’s good to live in cloud cuckoo land. But it is even wiser to join us in the real world down here.

Where do I turn to now?

Happy birthday Your Majesty…You look so good and...

Let us unite to fight this virus

Majoro’s election must rejuvenate the ABC

Of coronavirus, foreign scribes and unbridled...