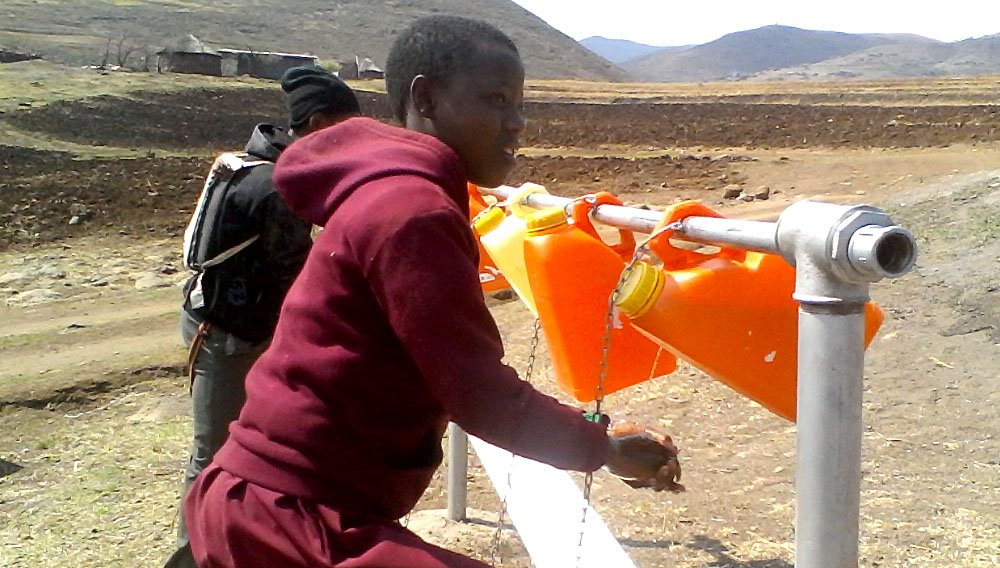 BOBETE, THABA-TSEKA – Sixteen-year old ‘Mantsali Selumi can finally afford a smile thanks to the Lesotho Red Cross Society and Wateraid Southern Africa who built toilets at her Marumo Primary School and Bobete Primary School this past week.

She can now focus on achieving good grades at school in order to realise her long cherished dream of becoming a soldier.

It was a dream which, for the last three years, appeared to be in jeopardy after the Marumo Primary School pupil began absenting herself from school to avoid the “humiliation” of having her monthly periods at a school without ablution facilities.

At first, ‘Mantsali was overjoyed to start menstruating as it signified her transition from being a child to a “big girl” or mature woman.

The joy soon transformed into a nightmare especially as the lack of disposal facilities at the school meant her used sanitary pads could turn up anywhere for the public to see.

The most graphic illustration of her shame was the sight of a dog running around with one of the blood-soaked pads.

It was an embarrassment that developed into a loathing for school resulting in perennial absenteeism.

Marumo Primary School, situated 33 kilometers east of Thaba-Tseka town, was one of the many schools in the district where the lack of proper sanitation services forced pupils and teachers to use the bush to relieve themselves.

Although both men and women bore the brunt of this lack of basic sanitation services, female pupils and teachers were most affected especially during their monthly menstrual cycle.

“We would go into the bushes and search for a safe place to change our pads and throw them into the river,” narrated a visibly embarrassed ‘Mantsali.

“But seeing a dog running around with a pad socked in fresh blood hit me hard and I cried in silent embarrassment as other children laughed at the sight.”

The mere possibility the pad could have been hers hurt so much and started her on the road to resenting and finally absconding from school.

And with that, she would have added her name to the 42 percent of African school drop-outs.

“I would bunk school even on days that I was not on my period. I got to a point where I did not care about my marks at school. I hated school and the more my parents and teachers tried talking to me, the more I hated it,” ‘Mantsali said.

Touched by hers and other pupils’ plight, Lesotho Red Cross Society and Wateraid Southern Africa decided to build ventilated improved pits (VIP) toilets for the two schools early this year.

According to SDG 4.5, by 2030 Lesotho should “eliminate gender disparities in education and ensure equal access to all levels of education and vocational training for the vulnerable, including persons with disabilities, indigenous peoples and children in vulnerable situations”.

And ‘Mantsali’s dream to become a soldier is back on track, thanks to the gesture.

“The toilets gave me back my life. I no longer worry about dogs running around with my used pads. I no longer have an excuse for failing to get good marks,” she says.

Of the 10 toilets, four each are for girls and boys and the other two for teachers.

Two of the VIPs were specially designed to cater for the female pupils and teachers during their periods. They are equipped with washing basins and built-in sanitary bins covered with disposable plastics for easy emptying.

“When you enter the toilet, you close the door, sit on the seat and change your pad and anything you have used,” explained Class 7 pupil Libakiso Lekere.

The 15-year old was one of the Marumo Primary School pupils inducted on the proper use of the toilets.

She further explained water had to be poured into the washing basin with pupils supposed to thoroughly wash their hands to ensure good hygiene.

The final task, Libakiso indicated, would be to remove the disposable plastic and throw it into a pit specifically constructed for the used pads.

The two metre deep pit, situated right next to the toilets, is securely locked and pupils could only gain access with permission from the teachers.

Libakiso said it was every pupil’s responsibility to ensure the toilet was kept clean at all times.

“If the toilet is dirty, we don’t have to wait for anyone to instruct us to clean it. We voluntarily clean it,” she says.

“We discussed issues ranging from the non-availability of sanitary pads and toilets as stumbling blocks to girl children’s education,” Mr Toloane said.

“We invited the Lesotho Times and their article influenced some policy decisions and we are glad people have taken up the issue of availing sanitary towels to vulnerable girls.”

He said sending girls to schools was not enough on its own, adding the learning environment should be conducive for girls to remain in school and compete on a level field with their male counterparts.

“Availing pads alone is not enough to achieve MHM. Toilets should also address challenges women and girls face during the monthly menstrual cycle. There should also be access to water so they can wash their hands afterwards.”

Mr Toloane said they hoped the Department of Education in Thaba-Tseka would construct similar or better sanitation facilities for schools in the district. He also revealed the WASH project in Bobete would be complete next March.

“If these projects are maintained well, this community could be recipients of other future projects since it would be a sign of commitment to ensuring sustainable development.”

As part of initiatives ensuring Marumo pupils and teachers observe good hygiene practices, Mr Toloane said they also built a tippy tap r for washing hands after toilet use and prior to touching food.

For his part, Marumo School Acting Principal Pokello Kamoli said the school never had toilets since its establishment in 1960.

“Learners and teachers would roam the bushes searching for spots to relieve themselves. If it was embarrassing for me as a man, then you can imagine girls and women during their monthly periods,” Mr Kamoli said.

He said the situation got worse at the beginning of the summer and winter cropping seasons as herd-boys would harass pupils while they were relieving themselves.

Mr Kamoli said valuable learning time was wasted in walking to the bush and looking for ideal spots for relief.

He also revealed that in last year’s Primary School Leaving Certificate (PSLC), Marumo School only had third class passes, which contributed to Thaba-Tseka’s 10th position nationally in the 2015 PSLC results.

“It now takes less than two minutes to and from the toilets and our girls are a lot happier in class. Those with access to proper sanitary pads are no longer missing school during their monthly periods,” he added.

Marumo School board chairperson Chopo Tsuinyane vowed to take care of the facilities.

“We promise to take good care of the projects and ensure future generations will also benefit,” Mr Tsuinyane said.

Thaba-Tseka District Council representative ‘Malikopo Malataliana said answering the call of nature was a “happy exercise only when it is done in a comfortable place”.

“It is even nicer when you know you can change your sanitary pad in a safe, protected environment where nothing can lower your dignity,” said Ms Malataliana.

She advised the school management to brace for a higher enrolment as more pupils were likely to join the school next year because of the facilities.

“Sometimes issues like toilets influence the choice of a particular school. Sanitation services might appear like a minor consideration but of knowing where to relieve yourself is enough to boost a child’s confidence and significantly contribute to good performance,” the former primary school teacher said.

Matlama out to stop in-form Liphakoe

Hlokomela Banana restores the dignity of the girl child