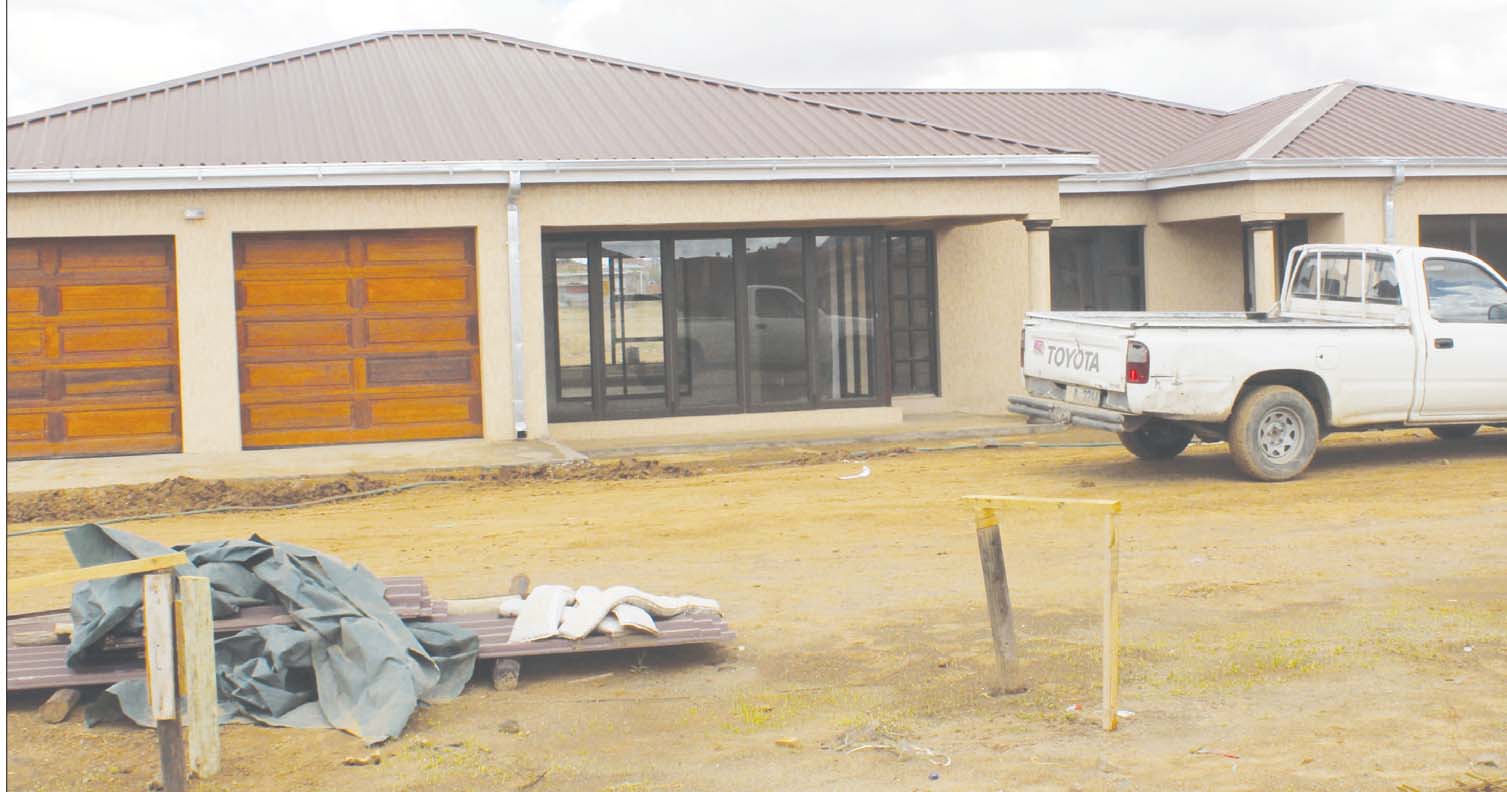 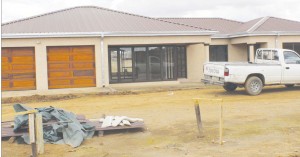 MASERU — The sustained development of residential properties in Maseru continues to transform the country’s capital into a modern municipality — and among the leading players of this phenomenal growth and rebirth is Standard Lesotho Bank.

It is every citizen’s aspiration to own his or her own home and over the years, the Standard Lesotho Bank has ensured the realisation of these dreams through a range of initiatives, which have since given birth to awesome properties in areas such as Katlehong — just next to the Maseru Mall — Thetsane West-Lesia and Maseru South West (Masowe).

Yet owning or building a home no-matter how modest can be such a challenge regarding the costs involved, but according to the Standard Lesotho Bank Home Loans Manager Azael Makara, thinking smart could be the first step towards acquiring that dream home.

“There could be building challenges but the answers lie in opting for smart approaches that would ensure everybody with a regular and stable income has his or her dream home,” Makara said.

“Whether one falls under the low, middle, high and private banking category which is determined by one’s income, he or she can access a home loan that would ensure a house or property of one’s dreams.”

According to Makara, the country’s Real Estate or property sector continues to realise positive growth, with the enactment of the Land Act (2010) proving a catalyst of the boom.

“The Act helped a lot in reducing the period of time people had to wait to acquire leases. A lease is a key requirement if one needs to apply for a home loan and as a result of the new legislation, there has been an increase in the number of people seeking funding to build residential properties.”

Because of the increase in demand for funding, Makara believes there is need to provide comprehensive financial services to help support the boom.

“We have seen people’s great need to become homeowners, which is the reason why we, as Standard Lesotho Bank, are there to provide advice on the best options based on one’s income. It is imperative for people to be smart in order to make good-investment choices.”

One of those smart choices, according to Makara, is avoiding the many troubles associated with buying land and constructing a house from scratch.

“The truth of the matter is the longer you take to build, the more expensive it becomes due to the changing costs of building material. On the other hand, with a home loan, which is one of our cheapest facilities, clients do not have to wait long before they start living on their property; in their new homes.”

The home loan facility, he further explained, provides a repayment plan of a maximum of 20 years, whose monthly installments Makara said are affordable.

“Most people don’t understand the benefits, mainly because they think if you get a home loan, there is no way the house would not be repossessed by the bank, which is not true, if clients are smart. Smart clients should be able to get advice from the bank when they sense they might struggle to service the loan. The advice we give guides you to understand that there are ways to avoid repossession; for example, renting out the property or part of it would be one good option.”

According to Makara, because well-built residential properties continue to appreciate in value, clients can also opt to sell them and repay the bank.

“In such a situation, they can be left with something after paying off the loan.”

Makara explained when planning to apply for a home loan, clients should also factor-in changing economic trends which might require them to opt for housing plans that could allow renting-out or have extension-provisions for further development of the property.

“Another way to ensure families are covered in emergency cases is through opening an investment account when they have a bit of financial excess. This can help them during bad financial upsets.”

The Standard Lesotho Bank home loan facility started in 1999 and has since assisted scores of clients find their dream homes in diverse areas of the country. While the majority of the bank’s home loan clients are in Maseru, the institution has however, also provided the credit to clients based as far as Mokhotlong and Qacha’s Nek.

“The demand for home loans is increasing and for as long as clients have the repayment ability, we can help them build their dream homes, wherever they might be here in Lesotho.”

Married couples, Makara added, can opt for joint-income to improve their financial entitlement.

Some couples, it has since emerged, have managed to benefit from  cluster housing projects offered by the bank, which are an emerging trend among young professionals.

These new developments are born out of joint, bulk-acquisition ventures between the Standard Lesotho Bank and various property developers, Makara noted.

“Some property developers have approached us with their development concepts, which they wanted us to finance. The process before agreement looks at the target-market and also joint-expos to sell the idea to clients and gauge the interest.”

The bank’s latest such partnership was with Quantum Quantity Surveyors — a property development company overseeing the housing development project in Thetsane West-Lesia, just next to the Beautiful Gates Orphanage.

Beginning last year, 18 houses have been under construction, some of which are already occupied. The prices of the houses range depending on the size and specifications, Makara said.

“So far, 95 percent of the houses are already taken,” Makara said.

The Thetsane West-Lesia initiative tells a story of discerning clients with a penchant for solitude. And as developments continue to unfold, Thetsane West-Lesia has helped transform the neighbourhood into a middle to high-class area for the modern family.

A classic example of how even modest-salaried employees such as civil servants, can afford a comfortable home and neighbourhood, the Thetsane West-Lesia has indeed, helped bust many a myth regarding home-ownership.

Tankiso Seboholi is one such civil servant — a teacher at Masianokeng High School and father-of-two who could not hide his joy at being the proud owner of a three-bedroomed house in a good locality such as Thetsane West-Lesia.

“I am very happy because I have a beautiful house. The monthly repayment is affordable and I like the fact that there is a provision of paying above my installment to reduce the loan-term.”

Seboholi and his family moved into their new home in March this year. “What impressed me was the short time they built the house. It was good to move into a house with water, toilets and electricity. It made life easy for my family.”

With such a beautiful house, Seboholi is now concentrating on furnishing it. “It’s really home sweet home for me and thanks to Standard Lesotho Bank.”

The team working on Thetsane West-Lesia, led by the Quantum Quality Surveyors, says there are possibilities new houses would be added to the initial 18, which are a mixture of two, three and four-bedroomed properties.

“There are still negotiations with the owner of the land close to this project,” Mphonyane Litlhakanyane of Quantum Quality Surveyors said.

According to Litlhakanyane, the housing plans are so rich in their designs.

“The specifications include urbane laminated timber-flooring, which provides warmth to the house in winter and exquisite bathrooms installed with the unique shower columns that spray water directly onto one’s back.

“As you can see, these are classy bathrooms with glass-encased showers while at the same time, the family room concept and others which include walk-in closets, formulate most houses here.”

Walk-in closets and other fitted utilities such as kitchen units are innovations brought about by the need to ensure sufficient spaces for storage, Litlhakanyane said.

“The difference is on budgets as seen by how other kitchens, for instance, are designed differently from others and the extra glass fittings.”

While the functionality of the interior remains important, Litlhakanyane said there are also new ways of adding value and making the property’s exterior design attractive without compromising its internal functionality.

“The house should provide that functionality while the outside-look too, should make good first impressions.”

The type of roofing and plastering, according to Litlhakanyane, is one such external look that needs attention.

The “in-thing” in terms of roofing, she said, is the pre-coated colomet industrial broad rib roofing, which makes its durability worth investing in.

The new settlement will also benefit from German energy technology, the digester, which is going to process methane gas for cooking.

However, according to Lekunutu Maama of Terrace Construction, the company building the houses, building of three to four-bedroomed houses can take up to just four months.

“Some houses here have provision for extension and this is a good advantage for the property owners,” Maama said.

Matekane shares his recipe for success

Mokhothu pleads with Famo gangsters to…